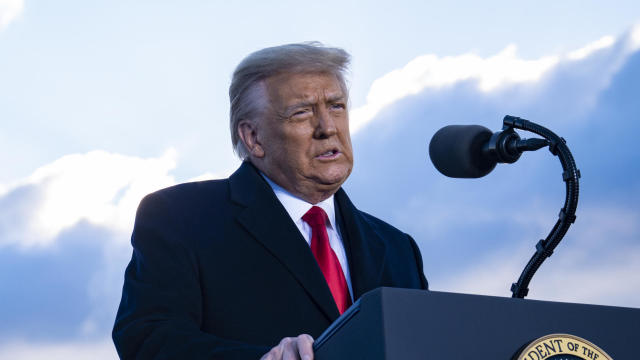 Former President Donald Trump's political committee is making its first major donation to help boost one of his endorsed candidates.
Trump's group, Save America PAC, made a $500,000 donation to Get Georgia Right PAC, which is seeking to defeat Georgia Governor Brian Kemp. Trump is backing former Senator David Perdue in his primary challenge against Kemp.
The donation was first reported by Politico.
Save America is set to file its March financial report by April 20, but at the end of February the committee had $110 million cash on hand. The group has made donations directly to some candidates who Trump has endorsed, but federal and state laws limit how much the PAC can give those candidates.
"President Trump is committed to supporting his endorsed candidates across the nation, but we won't be telegraphing our efforts to the media," Trump spokesperson Taylor Budowich said in a statement to CBS News.
The donation to Get Georgia Right came just before Trump went to Georgia to campaign for Perdue. An Emerson College poll released last week showed Kemp leading Perdue 43%-32%. Other public polls have shown Kemp with a similar lead.
Get Georgia Right recently released an ad attacking Kemp for not doing enough to investigate allegations of voter fraud in the 2020 election. Multiple recounts and several court decisions affirmed that President Biden won the state.
Perdue's latest campaign filing from February showed that he had about $900,000 cash on hand, while Kemp had more than $12 million. Kemp has reserved $4.2 million in advertisements through the May 24 primary and the Republican Governors Association has run ads supporting Kemp. The Atlanta Journal Constitution reported that Perdue has not yet launched a significant new TV campaign.
In addition to the donation to Get Georgia Right, Trump has campaigned for Perdue and held a fundraiser for the former senator at his Mar-a-Lago resort. Perdue has run ads touting Trump's endorsement.
"David Perdue is going to need a lot more than $500,000 to distract from his unhinged rant attacking the Georgia State Patrol," said Kemp spokesperson Cody Hall. Earlier this week, Perdue said the Georgia State Patrol "has been let to deteriorate by a lack of leadership from the governor's office in the last three years."
Fin Gómez is a CBS News White House producer.
source: https://www.cbsnews.com/news/trumps-political-committee-gives-500000-to-group-aiming-to-defeat-georgias-gop-governor/