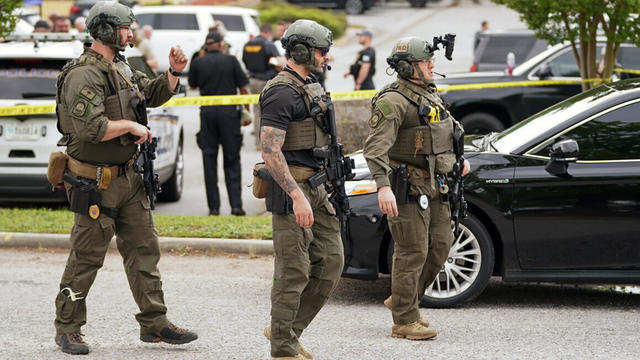 Twelve people were injured after a shooting at a South Carolina mall on Saturday, the Columbia Police Department said. Three people have been detained in connection with the shooting.
At around 2 p.m. or 3 p.m. local time, police began receiving reports of gunshots at Columbiana Centre Mall in Columbia, South Carolina. Police said at least three people were identified inside the mall with firearms and that at least one person fired a gun in the incident.
Ten people were hit by gunfire and two others were injured in a stampede following the shooting, Columbia Police Chief William Holbrook said at a press conference. The oldest gunshot victim was 73 and the youngest was 15, Holbrook said.
Eight people were transported to hospitals in the area. Six of those hospitalized are in stable condition while two others are in critical but stable condition.
Officials have not labeled the three detained people as suspects. Holbrook said they do not believe the incident was random and that the armed individuals may have known each other.
"There was some type of conflict that occurred that resulted in gunfire," he said at a press conference Saturday. "This was not a situation where we had some random person show up at a mall to discharge a firearm and injure people."
He asked anyone with information to contact the Columbia Police Department's Criminal Investigations Bureau as officials continue to investigate.
Columbiana Centre Mall will be closed until further notice, according to its website. Multiple roads in the area are closed and a reunification site has been established at the Fairfield Inn located at 320 Columbiana Drive, Holbrook said.
"Today's isolated, senseless act of violence is extremely upsetting and our thoughts are with everyone impacted," Columbiana Centre Mall said in a statement. "We are grateful for the quick response and continued support of our security team and our partners in law enforcement."
Tori B. Powell is a breaking news reporter at CBS News. Reach her at [email protected]
source: https://www.cbsnews.com/news/mall-shooting-columbiana-south-carolina/