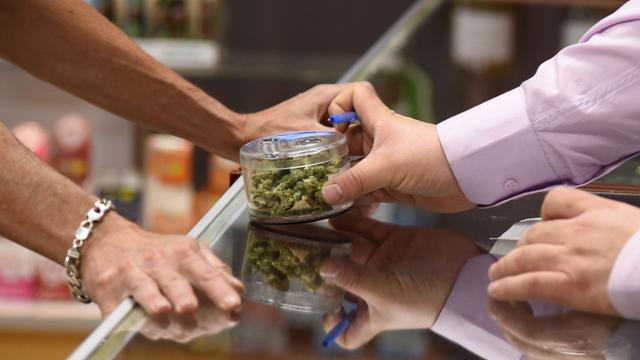 Two-thirds of Americans want recreational marijuana use to be legal under federal law and in their own state. As more states move to legalize marijuana, most people say they wouldn't mind if a licensed marijuana business opened in their neighborhood.
Recreational marijuana use remains illegal at the federal level.  The House of Representatives recently passed a bill to federally decriminalize marijuana.
Nearly all who support legalization under state law, also support it under federal law, and vice versa. In fact legal recreational marijuana gets the same level of support whether the question is posed about the state level or federal level, suggesting the jurisdiction may not matter much to people.
The legalization of recreational pot use in more states has sparked the opening of more legal marijuana businesses, and most Americans wouldn't mind this kind of business opening in their neighborhood: most either would favor it or say it wouldn't matter much to them.
Just three in 10 would oppose the opening of a licensed recreational marijuana business in their area.  Opposition is largely driven by those who are against making marijuana use legal in the first place.
Marijuana users (37% of Americans say they use it) are more supportive of legalization and of recreational marijuana businesses opening in their neighborhood, and support is even higher among those who use marijuana regularly.
Among those who say they never use marijuana, a slim majority favor legalization, but they are comparatively  less supportive than those who use. People who don't use the drug are less enthusiastic than those who do about the opening of licensed dispensaries in their neighborhood, but most of them would either favor it or say it wouldn't matter much to them.
Eighteen states, plus the District of Columbia, now permit recreational use of marijuana.
Even among those who live in the states where recreational marijuana use is currently not legal, a majority say they want it to be legal, and they support legalization under federal law, too.
As marijuana use has become legal in a number of states, it remains illegal under federal law, making it difficult for licensed businesses selling marijuana to use the banking system.
Legalizing marijuana at the federal level finds broad support across gender, education levels, racial groups and age. However, younger Americans (who are more likely to use marijuana) remain more supportive of legal pot than older Americans.
Political and ideological leanings do shape views. Most Democrats, liberals, independents and moderates favor legalization under federal law, but Republicans and conservatives are split on the issue. Age divides Republicans and conservatives, with those who are younger supporting legalization and those who are older opposed, particularly Republicans and conservatives ages 65 and over.
This CBS News/YouGov survey was conducted with a nationally representative sample of 1,612 U.S. adult residents interviewed between March 29-31, 2022. The sample was weighted according to gender, age, race, and education based on the U.S. Census American Community Survey and Current Population Survey, as well as 2020 presidential vote. The margin of error is ± 3.1 points.
Toplines
source: https://www.cbsnews.com/news/marijuana-recreational-legalize-opinion-poll-2022-04-20/