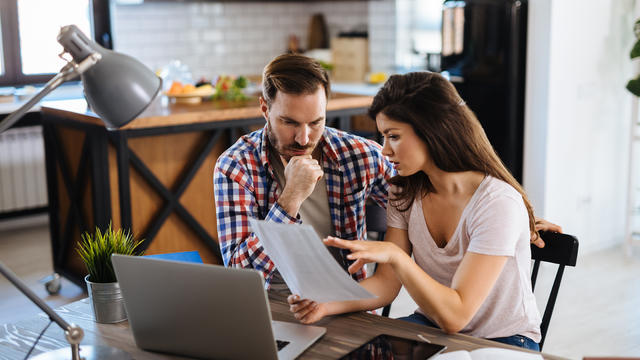 Shortly after moving to South Florida for a new job with the U.S. military, Shannon Kaufman and his wife, Wendy, signed up for another mission: buying a home.
After visiting 200 listings and making offers on 15 homes that ultimately didn't pan out, the Kaufmans finally found a home that fits at least some of their needs. They'll be renting it, however.
"We found a place that's smaller than we want, but it'll work until we have something built or until the market cools off," said Shannon Kaufman, 47.
America's housing market has grown increasingly frenzied, and prices are out of reach for many buyers, especially first-timers. This spring, traditionally the busiest season for home sales, is more likely to deliver frustration and disappointment for aspiring homebuyers. That's because the number of homes for sale nationally remains near record lows, fueling fierce competition among buyers vying for fewer homes.
Homebuyers have been hit with a "one-two punch" of rising home prices and rising mortgage rates this year, Jeff Tucker, senior economist for Zillow, recently told CBS MoneyWatch.
"What it means is any particular home you buy is going to be more expensive to pay for on a monthly basis," Tucker said. "For some folks that means looking at a smaller home in a different neighborhood, or a townhouse instead of a detached home.
Matthew Pointon, a senior property economist at Capital Economics, also notes that people who have been pre-approved for a mortgage are under pressure to clinch a deal on a home, especially those would lined up loans in January or February.
"Given most pre-approvals expire after 60-90 days, this group has an even more pressing need to buy," he said in a report.
Those trends have made the market more competitive for first-time buyers like Lisa Piercey and her husband, Alex Berardo. The couple began looking in December for homes at $350,000 or below. They offered $5,000 over the asking price on two properties but lost out to rival bidders.
"That was all we could afford," said Lisa Piercey, a 32-year old project manager. "It's really defeating, really disappointing."
In the end, the couple bought a townhome in a new construction community, though they see it as a stepping stone to a more spacious house with a big yard.
"It's big enough that we can still start our family and then move when the market hopefully dies down in a couple of years," she said.
source: https://www.cbsnews.com/news/home-prices-mortgage-rates-buying-a-house/