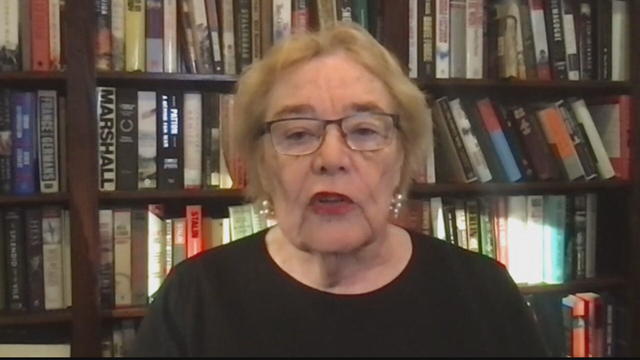 The following is a transcript of an interview with Democratic Rep. Zoe Lofgren of California that aired Sunday, Nov. 20, 2022, on "Face the Nation."
MARGARET BRENNAN: We turn now to California Congresswoman Zoe Lofgren. She serves on the Judiciary Committee and the Select Committee investigating January 6. Good morning to you, Congresswoman. I want to get straight to it. Does the refusal of the Vice President and the former president to comply with your investigation in any way impede the impact or outcome?
REP. ZOE LOFGREN: Well, we wish they had come in. Certainly other Presidents have come in when asked by the Congress, including Gerald Ford, Teddy Roosevelt, many others. It is almost Thanksgiving, and the committee turns into a pumpkin at the end of December. So we don't have time to litigate this. But I think they've cheated history. And they should have done otherwise. We, on the other hand, have received substantial information from other sources. And we're in the process of, as I'm sure you know, writing our report now, and
MARGARET BRENNAN: You're continuing to gather information, as I understand it, speaking to two Secret Service officials recently. What more do you need? And are you still sharing that information with the Justice Department?
LOFGREN: Well, we're not sharing information with the Justice Department. We're doing our own investigation. However, we anticipate when our report is released, to release all of the evidence that we have assembled so the public can see it, including the Department of Justice.
MARGARET BRENNAN: Okay, what do you have? I understand the committee has released documents to the Department of Justice, is that not the case?
LOFGREN: Well, we're not - we're no, we're, we're, we're doing our own investigation.
MARGARET BRENNAN: Right.
LOFGREN: And within a month, they - the public will have everything that we've found all the evidence. For good or ill. And I think we've, as we've shown in our hearings, made a compelling presentation, that the former president was at the center of the effort to overturn a duly elected election, assembled the mob, sent it over to Congress to try and interfere with the peaceful transfer of power. It's pretty shocking.
MARGARET BRENNAN: Well, as we know, the Justice Department has its own investigation. And that's what led us to the Attorney General making news just a few days ago with this special counsel to take up the events surrounding January 6. But what does putting this in the hands of a Special Counsel accomplish here? Do you think it actually removes politics? Or does it still just keep it there since the Attorney General will still have oversight of the special counsel?
LOFGREN: Well, I think from what the Attorney General said he sought to depoliticize this investigation. Obviously, career professionals are doing it and to have a special counsel overseeing it. But you know, the right wing never fails, up is down and down is up. The effort to depoliticize they are now criticizing is somehow a political measure. So, you know, the effort to say segregated the investigation from the Attorney General himself, is in the eye of the beholder. And of course, the former president is saying he won't partake as if you know, it's a - it's a slice of pizza. I mean, it's not up to him. He is being investigated for these offenses, and we'll see what they find.
MARGARET BRENNAN: You sit on the Judiciary Committee, you just heard Rod Rosenstein say that he thinks the US Attorney in Delaware is sufficient in terms of being able to independently decide on what to do with Hunter Biden and that case. I wonder if you agree with that, or if you think your Republican colleagues are right to ask for a special counsel to deal with the current president's son?
LOFGREN: Well, I don't know anything about that case. Certainly, in the case of –
MARGARET BRENNAN: But you do have oversight of the Justice Department?
LOFGREN: Yeah. Yes, but we don't, you know, I served with Mike Pence on the Judiciary Committee. We don't oversee and interfere with individual investigations in cases. That would be improper in terms of oversight. You know, if if the president's son has committed offenses, then, you know, there'll be a judgment on whether to prosecute or not, and that's the rule of law. Just as the rule of law applies to the former president, people in this country have to adhere to the law. And, you know, if you don't, if you commit an offense and the facts are there, then there'll be a prosecution. And that's what it's about living in a country where the rule of law, not just politics, leads us. That's about our democratic republic.
MARGARET BRENNAN: Well, the issue of what to do with Hunter Biden will come before your committee as the chair - the incoming chair of it has said along with the head of oversight, they want to lead investigations.
(CROSSTALK)
LOFGREN: There's nothing - no role for the legislative body and a prosecution.
MARGARET BRENNAN: Understood, but are you prepared as Democrats for this knife fight?
LOFGREN: Well, I mean, we're going to be there and the incoming Judiciary Committee Chair has a history of playing fast and loose with the truth. We're aware of that. And we will be there as truth-sayers.
MARGARET BRENNAN: We will be watching Congresswoman. Thank you.
source: https://www.cbsnews.com/news/zoe-lofgren-face-the-nation-transcript-11-20-2022/