Heavyweight world champion Tyson Fury and challenger Dillian Whyte went face-to-face with respect and a handshake in a final news conference before their big fight at Wembley Stadium. 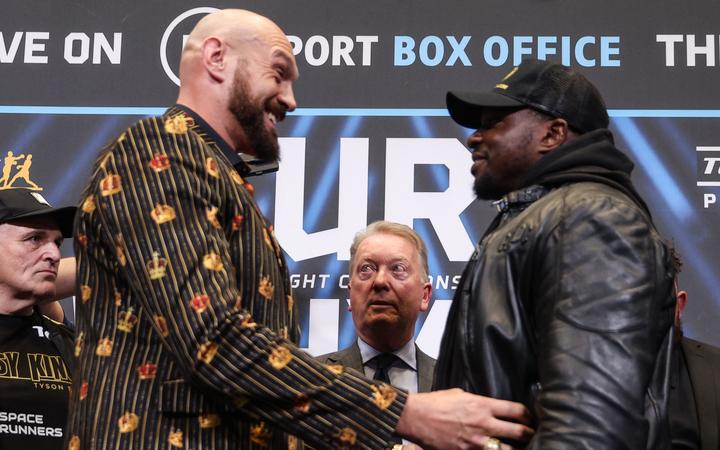 Fury's WBC title will be on the line on Saturday when the 33-year-old 'Gypsy King' faces former sparring partner, fellow-Briton and top-ranked contender Whyte in front of a 94,000 sellout crowd.

Promoter Frank Warren predicted a classic night of boxing and the champion said people under-estimated how good it was going to be.

"He's a good fighter. He's a good, strong, solid man. He's big, he's strong, he's tough, he's game, he's got a good punch on him, he's knocked out a lot of men," Fury said as he and Whyte faced a packed media audience.

"He's got a lot of experience in the fight game, he was also a kickboxer and an MMA man, so he's definitely a man that needs a lot of respect.

"I've trained as hard for Dillian as I did for (Deontay) Wilder or (Wladimir) Klitschko or anybody. So he'll be fighting the best Tyson Fury.

"I'm in great shape, I've had good sparring, I've had good food, I've drunk my water and had my vitamins so there's no excuses from me. I'm injury free and that's it," added the champion.

Whyte, the 'Body Snatcher', has been waiting years for his shot at a world title and said he planned to show up, do the job and disappear.

"I'm willing to do whatever it takes," he said. "Victory by any means necessary, I'll do that. I'm not scared to take risks. I've taken risks all my life."

While Fury has an unbeaten record of 31 wins and a draw, with 22 knockouts, Whyte has twice lost in 30 fights.

When tempers flared theatrically on stage between Fury's father John and Whyte's brother Dean, the situation was calmed by the two fighters pushing back their entourages and then shaking hands.

"People want a big ruckus at press conferences, they want to see screaming and shouting and punching, but let the two boxers do a fight and enjoy it," said Fury. "It's not for entourages to get involved.

"We're here to do a fight. The man's doing his job, getting paid to do it and so am I. People are in for a real fight. We don't need to scream and shout.

"It was all good, very respectful stuff."

New Zealander Joseph Parker has been training with Fury during ahead of the fight.