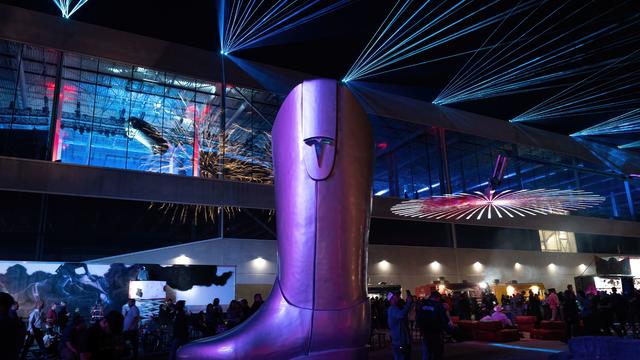 Tesla CEO Elon Musk has proven himself a good match for the "go big, or go home" state of Texas. The "Cyber Rodeo at Giga Texas," an invitation-only bash for thousands of guests at Tesla's new billion-dollar-plus "Gigafactory" in Austin, was the biggest secret and the toughest ticket in town Thursday.
As many as 15,000 people were expected to attend the private event hosted by Tesla mogul Musk to mark the opening of the new factory in Travis County that also serves as the company's new home following its move from California.
CBS Austin reported that 15,000 people such as Austin Mayor Steve Adler, city council members, and Travis County Commissioners received tickets to the exclusive event, while many Tesla owners and fans of Musk circled the perimeter of the new factory in hopes of being taking in as someone's plus-one.
"I love the man. I do love the man," Mike Berti, an artist from Los Angeles and Elon Musk superfan, told CBS Austin. Berti, who stood alongside a highway alongside the facility, came with a suitcase full of "lovElon!" T-shirts to pass out to others.
Somer Addljawad, from Washington, also stood on a road near the factory  to take in the action, reported CBS Austin. "We're here today because we wanted a trip and we knew Austin was having this event and were big fans of the brand," she said.
#ElonMusk super fan says he’ll trade t-shirts for a ticket to today’s #CyberRodeo. Mike Berti brought a suitcase of his LovElon! shirts and hopes they’re enough to get him in the door to Giga Fest. pic.twitter.com/zWlpe6hhO4
A county-issued permit said the event included interactive tours, food, alcohol and live entertainment. The event, which ended at midnight, was off-limits to the general public and the news media. Pyrotechnics leading up to the start of the big event, which included a presentation by Musk dressed in a T-shirt and jeans and a black cowboy hat, was live-streamed on Tesla's Youtube channel.
Back in December, Musk described the new gigafactory as "an ecological paradise" on the Colorado River, complete with a boardwalk and a biking and hiking trail. The 2,500-acre site includes over 10 million square feet of factory floor, according to the Tesla site, and also serves as the company's new global headquarters.
Elon Musk moved to Texas at the end of 2020, after selling his Bel Air homes earlier that year. At the time, he also mentioned the fact that there's no state income tax in the Lone Star state, a selling point for his move there.
Musk has said the plant, which would employ up to 10,000 workers, would build its Cybertruck, Semi, Model 3 and Model Y sport utility vehicles. Last month, he also opened another "Gigafactory" on the outskirts of Berlin to produce the Model Y SUV.
source: https://www.cbsnews.com/news/tesla-gigafactory-texas-party/