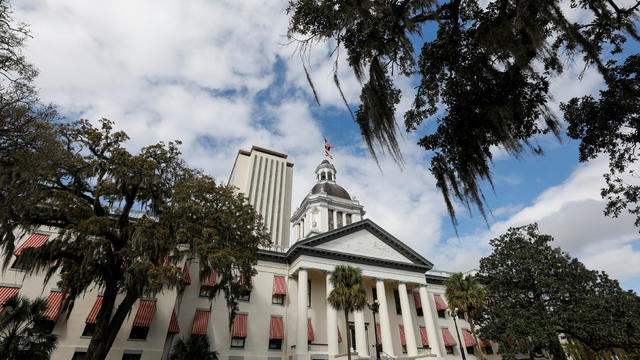 Florida's legislature passed a congressional map Thursday that could give Republicans four more House seats, and would dismantle two predominantly Black districts around Jacksonville and Orlando.
The map's passage also represents a political victory for Republican Governor Ron DeSantis, who inserted himself into the redistricting process by introducing several maps that were more aggressive gerrymanders and vetoed what the legislature was originally considering. After his veto, DeSantis called members back for a special session this week on redistricting.
The map would create 20 Republican-leaning seats and 8 Democratic-leaning seats. In its current configuration Republicans hold 16 seats and Democrats hold 11.
The shape of Florida's 5th District, which is represented by Democratic Congressman Al Lawson and has had a Black representative since 1993, is unrecognizable in the new map. The district originally stretched from Jacksonville to Tallahassee, to connect majority Black communities.
The map now splits up Jacksonville into two districts, the 4th and 5th District. It also takes away Black voters by shifting Florida's 10th District in Orlando, left open by Democratic congresswoman Val Demings, and jams two Democratic-leaning districts in Tampa and St. Petersburg into one district.
Florida gained a seat in Congress after the 2020 Census data was released.
Florida's House voted the map through 68-38, along party lines, on Thursday after a debate where many Democratic Representatives aired grievances on what they believe is a  discriminatory map. The Senate passed the map earlier in the week.
At one point in the house, several Black representatives caused an informal recess by moving to the front of the chamber to protest the map.
Republicans called for a vote and established a quorum despite consistent protests in the back of the chamber. Travaris McCurdy and Angie Nixon, two Black Democratic representatives, led a sit down protest, wearing T-shirts that said "Stop the Black Attack," according to the Orlando Sentinel.
"Dr. [Martin Luther] King– said a man can't ride your back unless it's bent. So, I am standing tall today, I am standing straight today and I will not bow to the ego, to the ambitions of one individual who wants to take us back," said Democratic Rep. Yvonne Hayes Hinson during the debate.
DeSantis and Republicans have defended the map's decision to carve up the Black population in Florida's 5th District by saying its current configuration, which sprawls over 200 miles in northern Florida, is not compact enough. This version of the district was approved by Florida's Supreme Court in 2015.
They also said in a memo attached to their veto that the district violates the U.S. Constitution because it assigns voters "primarily based on race."
"Race and political partisan data is in no way related at all to my drawing of any of the districts on the map," said Alex Kelly, DeSantis' deputy chief of staff, on Tuesday during a presentation of their map to a Florida Senate committee.
"It will prevent African American voters that live above the I-4 corridor from being able to have representation in Congress that are African Americans," said Daniel Henry, chair of the Democratic party in Duval County. "25% of African Americans that live in this state live above the I-4 corridor, and with these maps that the legislature is about to pass, they will all but ensure that African Americans will no longer have a voice in terms of federal representation."
There have been legal efforts in state and federal court to prevent the map from being enacted for this election cycle, but most operatives watching redistricting in the state expect them to be resolved after elections this November.
Michael McDonald, a redistricting expert and political science professor at the University of Florida, said there's a "tougher road" for a legal challenge about the 5th District in federal court because it doesn't hit the 50% Black population mark to guarantee protected status under section two of the Voting Rights Act.
"While it's possible to draw a 50% black voting age population district for the fifth congressional district, it's not a district you'd want to take home to mother," he said. "I don't think its shape would fly with the Supreme Court or federal courts."
McDonald, who was submitted as a potential "special master" to help redraw lines for one lawsuit against DeSantis' efforts, said any legal challenges may have better luck in state court. Florida passed their "Fair District" redistricting amendments last decade that would serve as checks on partisan and racial gerrymandering.
Florida's increase in Republican seats also gives the party a slight edge nationally when it comes to redistricting this cycle. Democratic legislatures and states with independent commissions have helped level the field with Republicans, despite them controlling the redistricting process in more states going into the cycle.
Florida's legislature also passed a bill that would end Disney's special self governing district status in the state, due to its opposition to the "Don't Say Gay" bill.
Aaron Navarro is an associate producer for the political unit at CBS News, focusing on House and gubernatorial campaigns as well as the census and redistricting.
source: https://www.cbsnews.com/news/congress-florida-map-more-republican-house-seats/