High demand and a shortage of vessels are putting pressure on Cook Strait ferry services this Easter weekend and into next month. 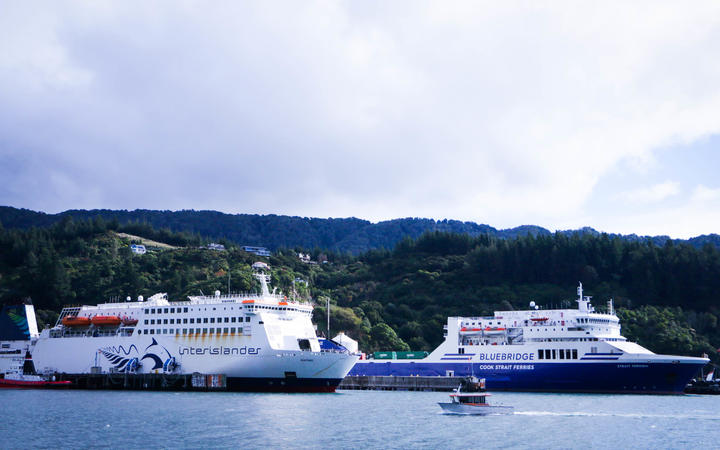 Weather disruptions, the impact of Covid-19, and ships out for maintenance and servicing are putting pressure on Cook Strait ferry services. Photo: RNZ/ Rachel Thomas

Customers are being forced to delay travel or abandon holiday plans due to a lack of available ferry bookings.

The Interislander's Aratere ferry is in dry dock in Sydney for routine maintenance and will not be available until Anzac weekend.

The two remaining Interislander ferries, Kaitaki and Valentine, are operating at maximum capacity, forcing bookings to be cancelled.

Interislander executive general manager Walter Rushbrook told Nine to Noon that weather disruptions, the impact of Covid-19 and having the Aratere being out of service were the reasons for the delays.

The Aratere was meant to be back in New Zealand before Easter, but it had been delayed going into drydock due to a large storm over New South Wales.

"We'd already had a cap on bookings, but with the disruptions going into next week we've been contacting all the passengers and trying to put them on adjacent sailings or asking whether they would be able to delay their travel to another time.

"We are acutely aware it's really disruptive and we are apologetic about that."

He said the company was doing its best to shuffle things around and get people onto their bookings where possible, as well as putting on extra sailings.

"The critical thing is space on our vehicle decks, so to book cars on - we just haven't got enough space, but we have loads of room for foot passengers if people want to travel that way."

Freight had also been affected by the disruptions and Rushbrook said they were clearing backlogs by taking "monster loads" where possible.

Bluebridge has its Straitsman vessel in for scheduled servicing over the Easter period until the second week of May, advising "availability on other sailings is limited over this period".

Interislander and Bluebridge have a load sharing agreement for freight, but with both companies having ships out of action for maintenance, they were facing the same problems.

"We are in contact with the drydock so we try and avoid double ups like this but with the weather delays, which are beyond our control and once the ships are in the drydock, they're in charge of the cadence of the work and when the ship is released," Rushbrook said.

It was an international maritime requirement that ships were taken out of the water every two years for inspection and Rushbrook said there were no dry docks in New Zealand big enough for the Cook Strait ferries.

A plan to build a large dry dock in New Zealand was supported by KiwiRail.

A temporary vessel, Valentine, had been leased from England to cover the Kaiarahi​, which is also out of action due to mechanical failure.

Rushbrook said it looked at 50 ships around the world and the Valentine, a freight only ship, was the best it could get.

"It has slightly lower operating thresholds because it doesn't have as much power as our other vessels but when it runs it's a very, very good freight ship."

Rushbrook said it planned to be back in normal operations by October, after scheduled ship maintenance was completed over the winter.

People were able to make bookings now through until next March.

"We're doing all we can at the moment to make sure our ships are going to be ready to go for the summer season and hopefully welcoming loads of international tourists back to New Zealand."