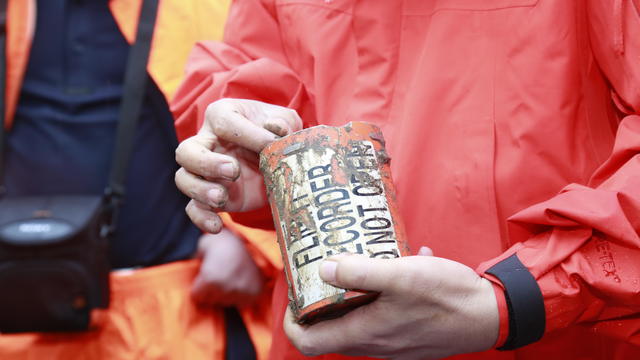 Beijing — Both black boxes from a passenger plane crash in southern China last month that killed 132 people are being analyzed by U.S. experts at a government lab in Washington, D.C. The National Transportation Safety Board said Tuesday it is helping its Chinese counterparts download information from the flight data recorder. The American agency said last week it was doing the same for the cockpit voice recorder.   Both may have been damaged by the impact of the crash. If the information on them can be recovered, it could shed light on why the China Eastern Boeing 737-800 went into a sudden nosedive and slammed into the ground in a mountainous area on March 21.
The crash left a 65-foot-deep crater in a mountainside, shattered the plane and set off a fire in the surrounding forest. More than 49,000 pieces of plane debris were found. It took two days to find the cockpit voice recorder and six days for the flight data recorder, which was buried 5 feet underground.
U.S. accident investigators arrived in China last weekend to assist the investigation by the Civil Aviation Administration of China. The NTSB team is taking part because the plane was manufactured in the United States.   Chinese officials have said a preliminary investigation report would be completed within 30 days of the crash.
Flight MU5735 with 123 passengers and nine crew members was headed from the city of Kunming in southwestern China to Guangzhou, a provincial capital and export manufacturing hub near Hong Kong in the southeast.
source: https://www.cbsnews.com/news/china-eastern-plane-crash-us-ntsb-flight-mu5735-black-boxes-boeing-737/