Ukraine war: Mariupol defenders will fight to the end - PM

Ukrainian defenders of the besieged port of Mariupol will fight to the end against Russian forces, Ukrainian prime minister Denys Shmyhal says. 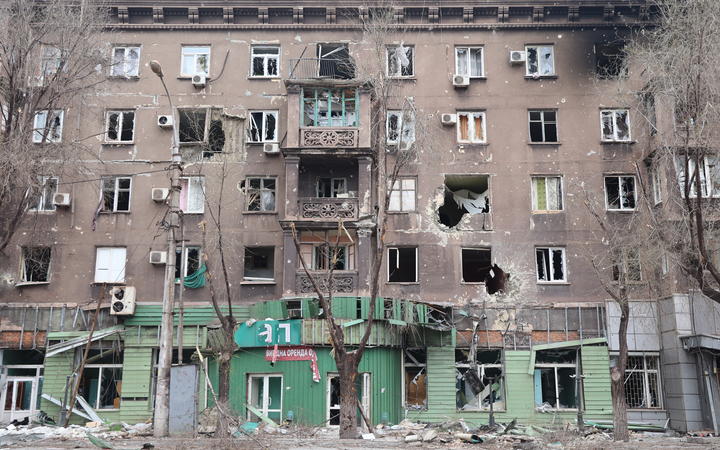 A damaged building in Mariupol, as a Russian deadline for Ukrainian fighters in the city to surrender expires. Photo: AFP/ Anadolu Agency

The city has not yet fallen despite a Russian ultimatum to remaining Ukrainian fighters to give up, he said.

Meanwhile President Volodymyr Zelensky said Ukraine had no intention of surrendering any territory in the eastern Donbas region.

In recent weeks Russia has focused its offensive on eastern Ukraine.

Ukraine officials said five people died after Russia shelled Kharkiv, and another two were killed in the town of Zolote.

In Mykolaiv in the south - where fighters have been holding off a Russian advance on the port of Odesa - the governor said there had been continuous rocket attacks.

In an interview with the US network ABC, Shmyhal said a Russian deadline for Ukrainian forces in Mariupol to surrender by dawn on Sunday had been ignored.

"The city still has not fallen," he said. "There is still our military forces, our soldiers, so they will fight till the end. And as for now, they still are in Mariupol."

Russia's military has said it controls almost all of Mariupol, while Ukraine's Azov Battalion is still holding out in Azovstal, a huge steelworks overlooking the Azov Sea.

The city is regarded as a strategic prize for the Russians, as seizing it would give them a swathe of territory connecting Crimea with regions held by pro-Russian separatists in the east.

Ukraine has demanded that Russian forces open humanitarian corridors from the city to allow civilians and wounded Ukrainian troops to leave, but no large-scale evacuations have taken place for several weeks.

Aid agencies have said the situation for civilians in the city is desperate.

As Mariupol defenders continue to hold out, Ukrainian officials are still denying any possibility of territorial concessions to Russia.

In an interview broadcast on Sunday by CNN, Zelensky brushed aside the idea of letting Moscow take over the Donbas and part of eastern Ukraine to stop the conflict.

He added: "Ukraine and its people are clear. We have no claim to anyone else's territories but we are not going to give up ours".