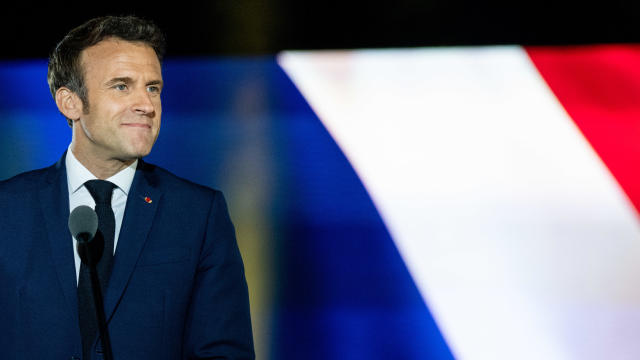 Paris — French voters reelected President Emmanuel Macron on Sunday night, granting him a second term with a substantial victory over his far right-wing opponent Marine Le Pen. CBS News correspondent Elaine Cobbe reports that many had expected the weekend runoff election results to be very close, but even with his clear win, Macron likely won't rest easy for long.
The significance of France's national election goes far beyond the country's own borders, and Cobbe says there were sighs of relief across much of France and far beyond as Macron's victory quashed the chances of an extremist president — hostile to the European Union and NATO, and with reportedly close ties to Russia — taking office, at least for another five years.
President Macron's supporters partied until late into the evening under the Eiffel Tower, celebrating his decisive win with more than 58% of the vote against Le Pen's 41%.
"We stood up against nationalism, we tried to show that today, we have to be more united than ever," said one reveler.
But carrying more than 40% of the electorate, it was the closest the far-right has come to taking the top seat in any French election, so Macron's celebration will be short-lived. The election has shown just how deeply divided France is right now — a reality the president acknowledged in his victory speech.
"We need to be respectful," he said. "Our country is full of so many divisions, so we need to be strong, but no one will be left behind."
He'll have a tough job uniting the French behind him. The results indicate that extremist voters far outnumbered those from the center, or the traditional left and right parties.
After the results were announced, there were protests in several cities against both candidates. Fireworks were launched at police and tear gas was used to clear crowds.
One banner derided Macron as "the Robin Hood of the RICH."
Le Pen echoed that sentiment in her own speech, accepting defeat but urging her supporters to keep fighting "this hoarding of power by a few," and vowing to continue her "commitment to France."
In an increasingly fractured France, Le Pen vowed to fight on.
Congratulations to @EmmanuelMacron on his re-election. France is our oldest ally and a key partner in addressing global challenges. I look forward to our continued close cooperation — including on supporting Ukraine, defending democracy, and countering climate change.
Congratulations for Macron have poured in from around the world, including from President Biden, who said he looked "forward to our continued close cooperation — including on supporting Ukraine, defending democracy, and countering climate change."
Germany's chancellor Olaf Scholz and Ukrainian President Volodymyr Zelenskyy were among the many other leaders to convey their well-wishes to Macron. They're relieved that France will continue to play a strong role in international diplomacy, but Macron's real fight now will be at home.
source: https://www.cbsnews.com/news/france-election-emmanuel-macron-2022-victory-marine-le-pen/