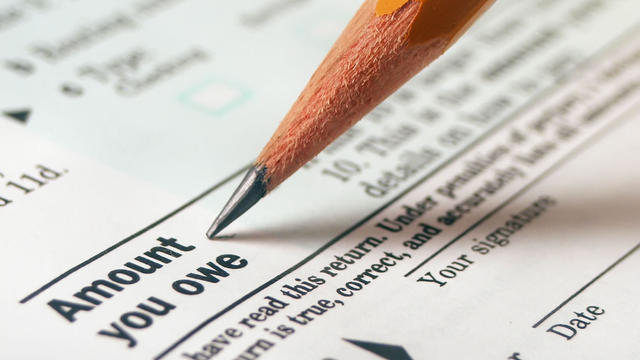 It's April 19, and most Americans — except for residents of Maine and Massachusetts — should have filed their tax returns by yesterday.
Of course, life isn't that simple. Every year, about 20 million individual tax returns arrive in between the official end of tax season and the end of the year. Some tax payers will have filed an extension, while others may have simply delayed the pain of paperwork only to be surprised with a sizable financial penalty at the end.
When you owe taxes, delaying the dreaded task of filing can mean hundreds of dollars in extra penalties.
If you expect to owe money and haven't filed yet, here are the different penalties and fees that could be in store — and ways to reduce them.
People sometimes avoid filing tax returns because they're worried they can't pay what they owe. That's a mistake, said Martin Davidoff, partner at accounting firm Prager Metis.
"What happens is, people say, 'Oh my gosh, I can't pay so I'm not going to file.' That's the worst thing in the world," Davidoff said. "If you don't file, you're going to be hit with much larger penalties."
The IRS' penalty for not filing is 5% of the amount of tax owed, imposed every month the tax return is late.
"If a return is filed more than 60 days after the due date, the minimum penalty is either $435 or 100% of the unpaid tax, whichever is less," the IRS notes.
There is also a penalty for paying late, but it's less punitive than that for not filing. That penalty for late payments also depends on how much tax you still owe relative to what you've already paid.
"If you did underpay, the IRS is going to want interest," said Davidoff. Currently, the IRS' interest rate is 4% per year, compounded daily, on any taxes not paid.
"If you pay them less than 90% of your tax liability, in addition to the 4% per annum, there's a half-percent-a-month penalty," Davidoff said.
So, if a taxpayer hasn't paid at least 90% of the tax they owe by the April deadline, "you're paying basically 10% per annum in non-deductible interest and penalties," Davidoff said.
Because not filing taxes garners the most severe penalties, the IRS suggests that taxpayers who can't pay the total amount they expect they owe, to file their returns anyway — or file an extension— and pay what they can.
"Taxpayers who are thinking of missing the filing deadline because they can't pay all of the taxes they owe should consider filing and paying what they can to lessen interest and penalties," the agency advises.
Taxpayers should make an effort to figure out what they owe and pay what they can, CPAs advise. Eric Bronnenkant, tax head at Betterment, suggests that people use the previous year's taxes as a starting point for how much they might owe.
"If your prior year is a good barometer for your current year, start with that as a way to come up with some sort of reasonable estimate," Bronnenkant told CBS News recently. "Don't let perfect be the enemy of good enough."
Even if you missed the filing deadline, you can avoid future hefty penalties by filing as soon as possible.
"The thing is, [the penalty is] per month. Whether you're one day late or 30 days late, it's per month," said Davidoff. "So get that return done by May 15. And even if you can't pay, you'll at least have the return filed by that date."
Taxpayers who file an extension and owe tax will still have to pay interest, but will avoid having to pay penalties. Here's a simplified example of the difference.
If a taxpayer owes $2,000 in taxes and doesn't file for an extension, they will pay 5% of the total amount owed for every month they are late as a failure-to-file penalty, plus 4% interest compounded daily.
So, if that taxpayer files their return in July, three months after the April deadline, they will owe an additional $300 for failing to file and $20 in interest — for a total of $320 in added charges, on top of the $2,000 tax bill that started the trouble.
If that person filed an extension and then paid off their taxes three months later, they'd still be on the hook for an underpayment penalty and interest, but that penalty would be less than $50 — far less than the cost if they didn't file at all.
If someone is owed a refund, there's generally no penalty for claiming it late — but you only have a three-year time limit to collect it.
"If you wait too long to file a refund return, you lose the refund," noted Nina Olson, founder of the Center for Taxpayer Rights and the former National Taxpayer Advocate. "So, even if you had a refund from one year that you could apply to another [year when you owe taxes], if you wait too long to file that return, you won't have that refund to apply to the back-tax debt."
source: https://www.cbsnews.com/news/ira-tax-late-filing-penalty-extension/