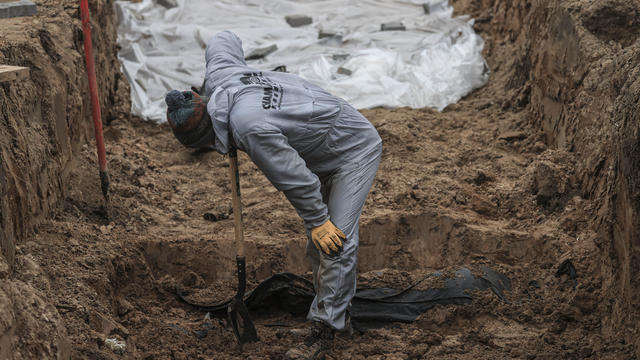 Kyiv — Russia's response to international outrage over Vladimir Putin's war in Ukraine has been to double down on propaganda. In the recaptured town of Bucha, north of Kyiv, Ukrainian investigators are exhuming body bags from mass graves as part of a war crimes investigation. But in Russia, Putin once again lied to his people about what's really happening in the war.
CBS News correspondent Chris Livesay reports that while the dust settles in and around the capital in the wake of the Russian forces' retreat, Ukraine's president is warning his people that the war is only entering a new stage of terror, with atrocities against civilians following every Russian bootprint.
Civilian neighborhoods and infrastructure east of the capital continue to go up in flames. In battered cities like Kharkiv, where a culinary arts school and surrounding apartments were reduced to rubble, innocent people are suffering so frequently that survivors say it can't be an accident.
"The Russian world has arrived to 'protect' us," resident Gennady said in sarcastic disbelief looking at what was left of his neighborhood. "Many 'thanks' to this Putin. There is nothing more to say."
Putin has refused to even acknowledge any human suffering from what he calls his "special military operation" in Ukraine. Speaking publicly for the first time in more than a week on that operation, he called his war "noble" and shrugged-off peace talks, which he said had reached "a dead end."
Despite mounting evidence to the contrary, Putin claimed that atrocities like those committed in Bucha — where CBS News witnessed the grisly aftermath firsthand — were "faked."
He announced a new stage in the war, confirming that his military's attention was shifting to the eastern Donbas regions.   New satellite images show Russian artillery setting the stage for head-to-head battles there. It's feared they could be unlike anything seen since World War II.
But Russia continues to suffer setbacks on the battlefield.
Viktor Medvedchuk, an oligarch who served as the Kremlin's main agent of influence in Kyiv, was captured by Ukrainian security agents this week after escaping from house arrest not long after Russia's invasion.
It's another humiliating loss for Putin, who is the godfather of Medvedchuk's daughter.
Ukrainian President Volodymyr Zelenskyy has offered to swap Medvedchuk for Ukrainian prisoners of war held by Russia.
Zelenskyy has continued to rally international support for his country. On Wednesday he was to meet the Presidents of Poland, Lithuania, Latvia and Estonia, who were visiting Kyiv. All of those countries have been invaded by Russia before, and they don't want it to happen again.
source: https://www.cbsnews.com/news/ukraine-news-russia-war-vladimir-putin-atrocities-peace-talks-donbas/