Nothing off table with future sanctions against Russia - US official

All Russian imports to New Zealand will be slapped with a 35 percent tariff in response to what the foreign minister is describing as "abhorrent and reprehensible" atrocities committed against Ukrainian citizens.

It comes as the president of Ukraine delivered a blistering rebuke of the United Nations for its lack of action over Russia's invasion of his country and the litany of war crimes he says has followed. 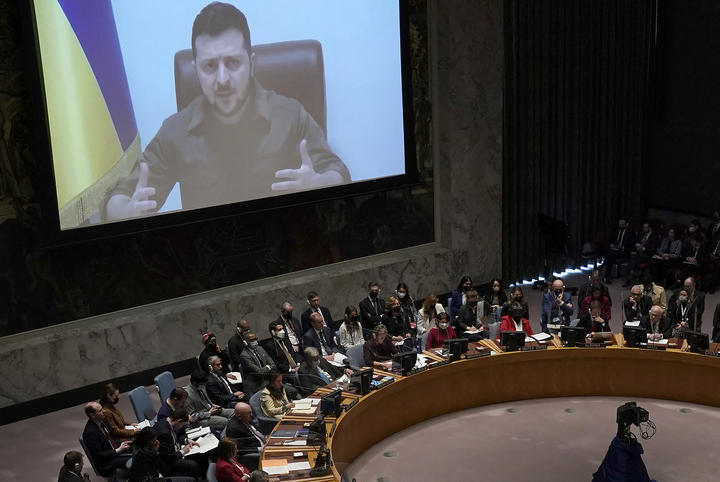 Addressing the UN by video link, Volodymyr Zelensky called for Russia - one of five permanent members with veto powers - to be expelled from the Security Council, to stop it blocking decisions about its own war.

He also challenged the organisation to dissolve itself or reform to be a more effective peace-keeper.

Meanwhile US President Joe Biden has renewed calls for Russia President Vladimir Putin to be tried for war crimes.

The United States says nothing is off the table in terms of further sanctions against Russia.

The US State Department's director of eastern European affairs John Armstrong previously served at the US embassy in Kyiv.

He told Checkpoint it will not be a short conflict in Ukraine.

"These are horrendous crimes, and as the secretary of state and the president have said, we condemn these strongly. There is no place for this sort of thing in the modern world, and the perpetrators do need to be held accountable.

"Personally, to me as someone who served in Ukraine, in Poland and Romania, also Belarus and Russia, it is just mind-boggling and incredibly saddening that you see crimes now that are similar to what the Nazi Germany did during the Second World War, carried out in some of the same areas that suffered under Nazi occupation.

"They're certainly war crimes. It's been stated by more than one that Putin is a war criminal. There's a pattern of abuse, torture and just outright murder. Executions of civilians with their hands tied behind their backs.

"So this is more than just isolated incidences and more than isolated units here or there.

"There definitely seems to be… someone further up giving orders. These are just horrendous crimes and we need to follow up and to hold those who carried them out accountable."

Armstrong told Checkpoint he believes the level of brutality as seen in Bucha is a strategy rather than random acts of soldiers.

"Ukrainian forces haven't necessarily liberated all areas yet, but there are reports from other areas that similar things have taken place, which indicates again, it's a decision made by somewhere further up." 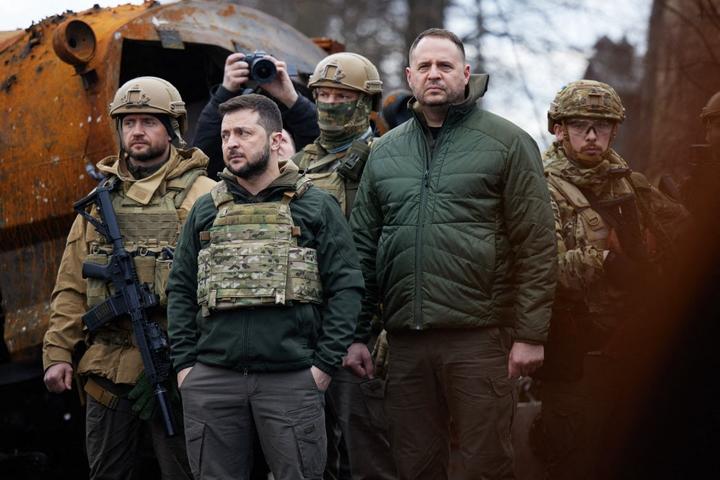 US President Joe Biden has said Vladimir Putin should stand trial for war crimes. But the question is how the Russian president would be arrested.

"I think the first step is of course to have the will, and declare, call things by their proper name, which I think that the president has done quite well on.

"The next step is the execution, and I think one of the things that will have to take place is there'll have to be a careful gathering of evidence. I know the Ukrainian government has already begun in this area. We're also supporting efforts to gather evidence.

"In any sort of legal proceeding, especially one of this gravity, you need good strong evidence. There needs to be a good strong exacting case.

"What the exact venue for such a thing would be, I think that's further down the road and I have not seen any planning on that, but it's definitely the key thing is to call things as they are."

Armstrong said after a career working in the region it is truly painful to see what has happened to Ukraine in past weeks.

"I'm not in Ukraine, I'm not suffering, I'm not having to sit in the cellar or go to the front and send my family off. It's just, having worked for three years in Ukraine and knowing how great and friendly and hospitable the Ukrainian people are, and how proud they are of the country they built in the past 30 years coming out of the Soviet period… It's just truly painful for me to see this happen to Ukraine." 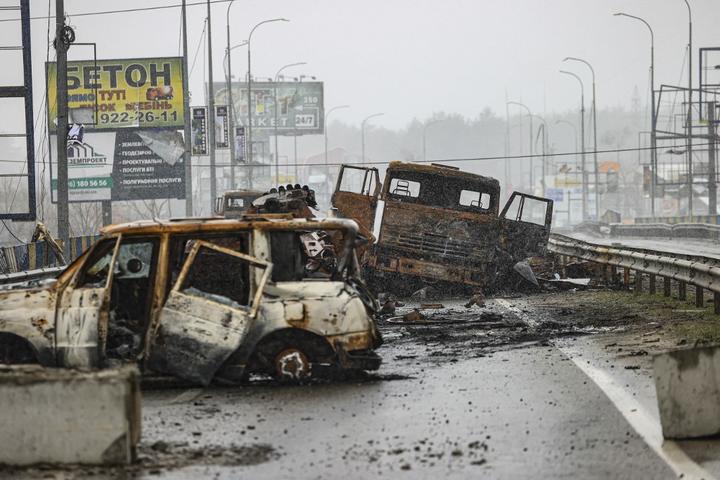 Sanctions have hit Russia from around the world, but it is pushing on with its invasion of Ukraine. Secondary sanctions are being considered by the United States, which would target countries that are still dealing with Russia.

"We've had more sanctions put on Russia than in any country ever. I think everything is on the table," Armstrong said.

"I emphasise that everything is on the table, we're in uncharted waters in many ways here, definitely in a new situation. If [secondary sanctions] would happen, it would cause countries and companies to make a choice.

"The door is open for Russia to stop this. This unprovoked, brutal, unjustifiable war against Ukraine and the Ukrainian people that violates the basic rules of the international order. Russia can stop at any time.

"If a peace agreement that ended the war, that Ukraine had freely agreed to, it could lead to removal of sanctions."

He pointed to the situation around communist Poland in the 1980s, where sanctions were gradually removed over time. 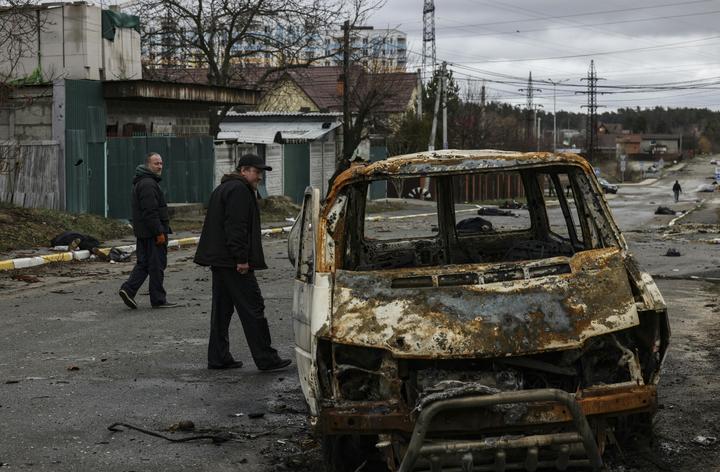 Armstrong told Checkpoint based on information he has seen and statements from the secretary of state, he does not see Russia retreating.

"We see withdrawal, regroup and preparation for more offensive action in the eastern part of Ukraine. Don't get me wrong, it's great that Russian forces are moving further away from Kyiv, but the eastern part of Ukraine is also Ukraine, and as president Zelenskyy said, he's not going to compromise on Ukraine's territorial integrity or sovereignty. That's a position the United States government supports wholeheartedly." 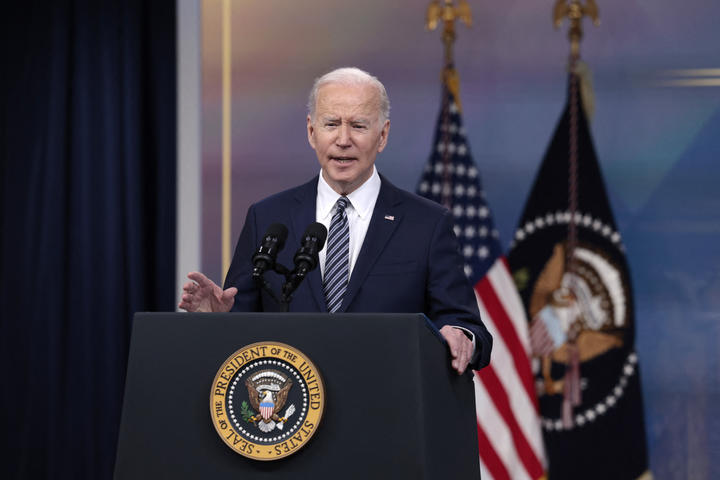 Biden has unveiled plans to release tens of millions of US oil reserves over the next six months, as Russia's oil is sanctioned. Armstrong said it is good advice not to expect a result quickly in Ukraine.

He said the conflict will drag on, but Biden's six-month timeframe is not necessarily an indicator of how long the US government expects it to continue.

A common question regarding the US' reaction to Russia is how the world can set a benchmark for acceptable behaviour, when nations making accusations have not upheld the same standards for themselves.

"No country is perfect, my own included," Armstrong said.

"I'm a patriot and I love my country and I'm sure many of your listeners love New Zealand too, which is normal.

"I do believe in redemption. I truly believe that Russia could turn around and accept the rules-based order.

"I think we have been pretty clear on territorial integrity, and not supporting war as a way to change one's borders, or just because one covets territory a neighbour has.

"We went to war in for that principle in in the Gulf War, also certainly World War II.