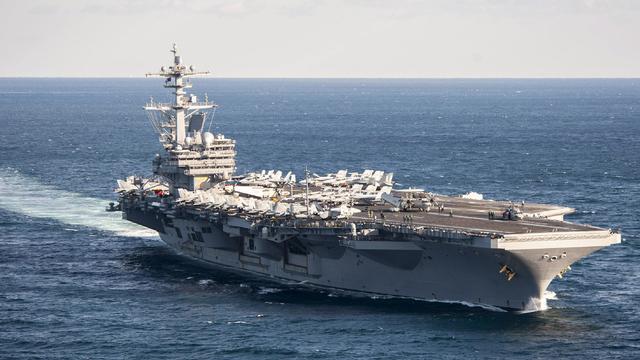 The captain of the aircraft carrier USS George Washington told his crew on Monday "the suicides have got to stop" after another one of its sailor had apparently died by suicide over the weekend. It was the third such death in just nine days.
"We got to stick together," Captain Brent Gaut said, according to a transcript provided to CBS News. "We got to get through this together."
Gaut called out the names of six George Washington sailors he said had died in the past nine months, indicating that five of them had died by suicide. That differs from the Navy's official count of four suicides, apparently because the cause of one death is still officially listed as "undetermined." Whether the number is four or five, the outbreak of suicides aboard the aircraft carrier is now under investigation, in an effort to uncover any underlying causes related to the way the ship is being run.
The George Washington has been in the shipyard at Newport News, Virginia, for more than four years while it undergoes a major overhaul which includes a refueling of the nuclear reactor that powers the ship. The combination of COVID-19 and unexpected repairs has kept the carrier in the shipyard for nearly a year longer than expected.
While it's in the shipyard, the George Washington is essentially a construction zone, and conditions for those members of the crew living on board can become cramped, hot and loud. The investigation will now seek to determine whether living conditions aboard the carrier played a role in the suicides and whether the ship's commanders did everything they could to make the conditions as acceptable as possible.
The three most recent sailors who died by suicide are Seaman Recruit Xavier Mitchell-Sandor, Petty Officer 3rd Class Natasha Huffman and Petty Officer 3rd Class Mikail Sharp.
Responding to the recent suicides, Pentagon spokesman John Kirby said, "Navy leadership is taking this very serious. They are looking at what has happened on the George Washington and trying to better understand it."
Service members and veterans who are in crisis or having thoughts of suicide and those who know a service member or veteran in crisis can call the Military Crisis Line/Veterans Crisis Line for confidential support 24 hours a day, seven days a week, 365 days a year. Call 1-800-273-8255 and Press 1 or text 838255 or chat online at VeteransCrisisLine.net/Chat.
source: https://www.cbsnews.com/news/uss-george-washington-sailor-deaths-captain-message/