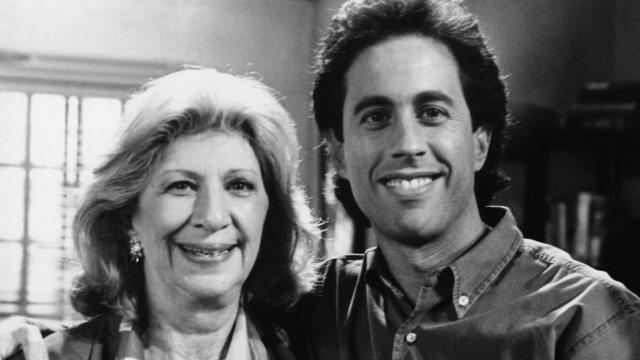 Actress Liz Sheridan, who played Helen on the hit TV series "Seinfeld," died in her sleep of natural causes early Friday morning, her representative confirmed to CBS News. She had turned 93 five days before her death.
In addition to her role as Jerry Seinfeld's mother, Sheridan also played Mrs. Ochmonek on the show "ALF" in the late 80s. She appeared in several other TV shows and movies throughout her career, as well as 12 Broadway shows, including "Happy End" with Meryl Streep, her representative Amanda Hendon said. She also enjoyed performing her one-woman show called "Mrs. Seinfeld Sings."
Sheridan, who was born Elizabeth Ann Sheridan, wrote a book about her relationship with actor James Dean. Titled "Dizzy and Jimmy," the book is currently being turned into a movie, her rep said.
"Liz's worldwide fan base will continue to enjoy her extensive body of work for years to come," Hendon said in the statement. "She was always very grateful to her fans and felt blessed to have enjoyed decades of work in the entertainment business."
Sheridan's death comes less than two weeks after the death of Estelle Harris, who played George Costanza's short-fused mother on "Seinfeld."
Sheridan is survived by her daughter and son-in-law, the rep added.
Sophie Reardon is a News Editor at CBS News. Reach her at [email protected]
source: https://www.cbsnews.com/news/liz-sheridan-died-actor-jerry-seinfeld-mother-dead-age-93-cause-of-death-natural-causes-2022-04-15/