'They are pretty enigmatic': Arnoux's beaked whales spotted in Antarctica

A group of researchers from New Zealand at Scott Base have had a rare sighting of Arnoux's beaked whales.

The group spotted the pod of whales last month, but the species was not confirmed until today after extensive review of video footage that was taken.

They were seen in a bay and stayed for about half an hour.

"They are pretty enigmatic for being an exceedingly large animal, we don't know that much about their population," he said.

"We're working blind a little bit on these, so every record we get is new information."

It was a highly detailed process of elimination to confirm the species, with the whales only slightly breaching the water in the photos that were captured, van Helden said.

It was the third time Arnoux's beaked whales had visited Scott Base in seven years, with previous sightings in 2016 and 2021. 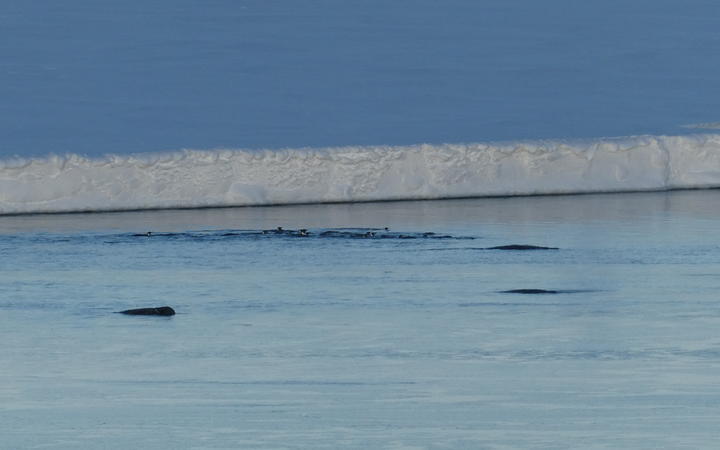 Van Helden said the regular visits indicated that location being significant for the whales at certain life stages.

"It's actually having those repeated moments that makes it exciting."

Antarctica New Zealand project manager Matthew Jordan captured footage of the whales and said there was plenty of debate about the species.

"I have seen a number of minke whales from Scott Base, but knew almost instantly that the round head and dorsal fin were not those of a minke whale," he said.

"It was such a privilege for the team at Scott Base to have the rare experience of seeing them."

Three whales were visible from the footage, but van Helden said there would have been far more.