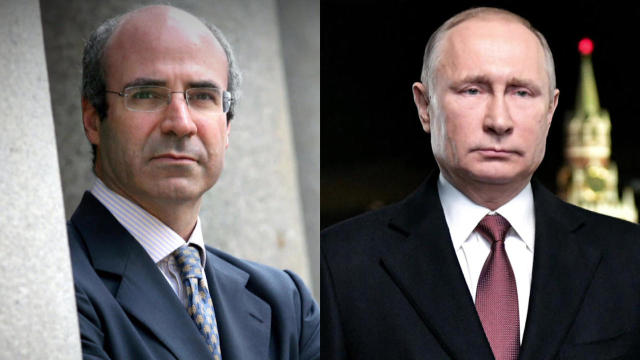 Bill Browder, an American-born, U.K.-based businessman, says the war in Ukraine is sharpening the world's focus on Russian President Vladimir Putin. "All of a sudden, the world cares about Vladimir Putin's evil," he told correspondent Seth Doane.
But that's long been clear to Browder, a Putin target himself. It was while walking in a London park that he received an alarming phone call: U.S. intelligence had learned Browder might be kidnapped and taken to Russia.
He recalled, "My safe world in London really evaporated."
Browder's decades-long odyssey with the top levels of Russian power started after he moved to Russia in the 1990s to profit from its privatization following the fall of the Soviet Union. Browder's Hermitage Fund soon became the largest foreign investment fund in the country. They researched Russian companies, initially to invest:
"What we discovered was that the oligarchs and corrupt officials who controlled these companies were stealing all the profits, all the assets, out of the companies," Browder said. "And so, the only way that I felt like I could responsibly invest is if I could figure out how they were doing the stealing and then trying to stop them."
"Not a way to make yourself very welcome in Russia?" asked Doane.
"Well, it was interesting because at the beginning of this moment, Vladimir Putin was fighting with the same guys that I was fighting with. But it turns out that he wasn't trying to end the oligarch era; he just wanted to become the biggest oligarch himself."
Browder showed Doane charts laying out the web of elaborate money-laundering operations they helped to uncover. "The money flowed from the Russian treasury through Moldova, to Latvia, then to Switzerland," said Browder. "The whole idea of money laundering is to make it so complicated that effectively nobody could put together a chart like this."
Doane asked, "It takes an investment guy who's moved to Russia to do this?"
"It takes an investment guy whose lawyer and friend was brutally murdered, and has made it his mission for the rest of his life to go after the murderers, to do this," he replied.
That lawyer and friend was Sergei Magnitsky, who'd been investigating a tax fraud scheme on Browder's behalf. "My company paid taxes to the Russian government," said Browder. "A bunch of Russian officials seized my documents, and then organized an identify theft of my companies, and then organized for a $230-million tax refund of taxes that we paid back to those stolen companies so they could enjoy the money. Sergei was the person who figured out the whole $230 million tax rebate fraud."
Magnitsky then provided testimony to the Russian state investigative committee: "But five weeks after Sergei testified, the same officials whom he testified against arrested him, put him in pre-trial detention in Russia, where he was then tortured to get him to withdraw his testimony."
Sergei Magnitsky died in a Russian jail in 2009. He was 37 years old.
"Do you feel responsible for his death?" Doane asked.
"I do."
"How do you deal with that?"
"I made a vow to his memory, to his family, to myself that I was going to devote all of my time, all of my energy, and all of my resources to go after the people who killed him, [to] make sure they faced justice," Browder replied.
He lobbied for a landmark piece of legislation called the Magnitsky Act. It originally sanctioned people linked to that tax fraud and Sergei Magnitsky's death. Signed into law in 2012, it focused attention on the sort of corruption they'd uncovered. Some of the money from that tax scheme wound up in properties purchased in London, New York and Dubai.
Browder's search for justice was the basis of a bestselling book, "Red Notice." Now, out this week, is his latest, "Freezing Order" (published by Simon & Schuster, a division of Paramount Global, which owns CBS). It's the tale of what happened next, a true story of "money laundering, murder, and surviving Vladimir Putin's wrath."
Doane asked, "Some of this sounds like something out of a mob, mafia movie?"
"Vladimir Putin is the mafia boss," said Browder. "All of his ministers are actually, if you look at 'The Sopranos,' like the New Jersey Mafia and the Brooklyn Mafia, the Philadelphia mafia. They can all take as much money as they can steal, and they've got to pay a tribute up to the mafia boss, which is Vladimir Putin."
Browder alleges that some of that stolen $230 million ended up in the hands of Putin, a leader infamous for his shadowy wealth. The Russian president's official salary is about $140,000 annually, which raises some obvious questions about his $1.4 billion residence, his $700 million yacht, and his million-dollar watch collection.
Putin has long maintained Sergei Magnitsky died of a heart attack. His animus toward Browder was clear in his 2018 joint presidential press conference in Helsinki, when he suggested to U.S. President Donald Trump that Moscow might be willing to "swap" 12 indicted Russian military intelligence officers if the Trump administration would turn over Bill Browder to him.
"I was in shock," Browder said.
He has successfully campaigned for other countries to adopt the Magnitsky Act, to target corrupt officials and human rights abusers, and Browder is proud that now it's among the sanctions being used to punish Russia since its invasion of Ukraine.
"The story of Sergei Magnitsky is a tiny microcosm of what's now been multiplied by a million times," he said. "The people of Ukraine are bearing the criminal brunt of Vladimir Putin in the same way as we did in a very small way. And I feel heartbroken, because if people had listened more to what I was saying over the last ten years, perhaps we wouldn't be in this situation."
READ AN EXCERPT: "Freezing Order," on Putin, money laundering and murder
For more info:
Story produced by Mark Hudspeth. Editor: Emanuele Secci.
source: https://www.cbsnews.com/news/bill-browder-vladimir-putin-magnitsky-act-russian-money-laundering/