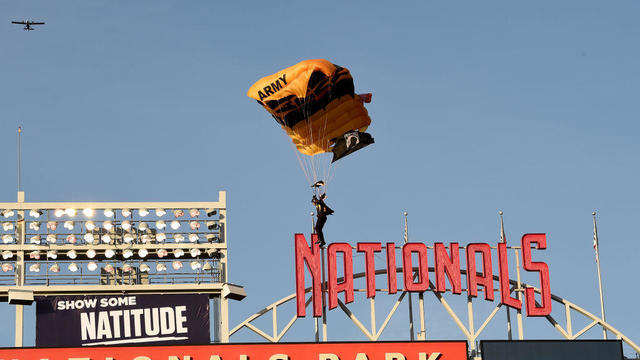 A Washington Nationals pregame display involving U.S. Army parachutists briefly caused an evacuation at the U.S. Capitol on Wednesday. U.S. Capitol Police around 6:30 p.m. sent an alarming notice to Capitol Hill staff that it was "tracking an aircraft that poses a probable threat to the Capitol Complex."
Less than 20 minutes later, police sent an update: "The aircraft no longer poses a threat to the Capitol," and USCP said that buildings in the complex were being prepared for re-entry. Its message did not contain further information about the aircraft police had initially deemed a "probable threat."
According to House Speaker Nancy Pelosi, the Federal Aviation Administration failed to inform Capitol Police of the pre-planned flyover, a communication breakdown that she called "outrageous and inexcusable."
"The unnecessary panic caused by this apparent negligence was particularly harmful for Members, staff and institutional workers still grappling with the trauma of the attack on their workplace on January 6th," Pelosi said in a statement. "Congress looks forward to reviewing the results of a thorough after-action review that determines what precisely went wrong today and who at the Federal Aviation Administration will be held accountable for this outrageous and frightening mistake."
The FAA did not immediately respond to a request for comment from CBS News.
USCP tweeted that the Capitol had been evacuated "out of an abundance of caution" and promised "more details to come."
While the evacuation was underway, flight tracking site FlightAware indicated that a plane flying in the restricted area belonged to the Army Golden Knights parachuting team — which was dropping parachutists at the Washington Nationals game in recognition of Military Appreciation Day.
Social media users tweeted about the Golden Knights' landing.
Pretty cool to have the Army Golden Knights drop in before the game pic.twitter.com/045KJXAGSp
The USCP has not made any further statements on the evacuation.
Members of Congress are in their second week of recess and are not expected to return until next week.
Kathryn Krupnick, Jack Turman and Rebecca Kaplan contributed to this report.
source: https://www.cbsnews.com/news/capitol-evacuated-nationals-parachute-show/