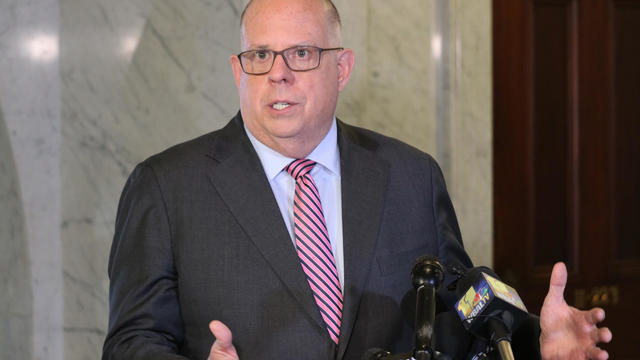 Maryland Gov. Larry Hogan vetoed a measure Friday that would expand access to abortion in the state by ending a restriction that only physicians can provide them and requiring most insurance plans to cover abortion care without cost.
The Republican governor, who isn't ruling out a run for the White House in 2024 after his second term ends early next year, wrote that the bill "endangers the health and lives of women by allowing non-physicians to perform abortions."
"The bill risks lowering the high standard of reproductive health care services received by women in Maryland," wrote Hogan, who has previously said he personally opposes abortion though he considers it settled law in the state. "These procedures are complex and can, and often do, result in significant medical complications that require the attention of a licensed physician."
Democrats, who control the General Assembly, passed the legislation with enough votes to override the veto before the scheduled adjournment of the legislative session Monday at midnight.
Supporters say Maryland does not have enough abortion providers for the needs of the state. They have pointed out that many counties do not have a single provider. The bill would remove a legal restriction preventing nurse practitioners, nurse midwives and physician assistants from providing abortions. It would create an abortion care training program and requires $3.5 million in state funding annually.
Separately, the governor decided he would neither veto nor sign a measure that sets accelerated greenhouse gas reduction goals for Maryland and takes a wide variety of steps to meet them. The measure will become law without Hogan's signature. The governor also said a bill that will require the state retirement and pension system to consider certain climate risks when managing assets of the system will go into law without his signature.
"These two bills are an example of poor legislative practice and misguided resources resulting in partisan politics; however I will allow them to pass into law in hopes they will generate future deliberation and discussion on this critically important issue," Hogan wrote.
The measure aimed at slowing climate change would speed up Maryland's current goal of reducing greenhouse gas emissions from 40% of 2006 levels to 60% by 2031. It also sets a goal of achieving carbon neutrality by 2045 in the state. That means at least as much carbon would be removed from the atmosphere as what's being emitted.
The bill includes a variety of provisions to cut emissions. For example, it would increase the state's electric vehicle fleet and reduce emissions from large buildings.
The measure seeking to expand abortion access comes at a time when the conservative majority on the U.S. Supreme Court is weighing whether to overturn Roe v. Wade, the landmark 1973 ruling that banned states from outlawing abortion.
If they do, at least 26 states are likely to either ban abortion outright or severely limit access, according to the Guttmacher Institute, a research and policy organization that supports abortion rights.
That would force many women to travel to other states to get abortions, prompting Democratic-led legislatures like Maryland's to pass new laws to prepare for them.
source: https://www.cbsnews.com/news/maryland-larry-hogan-veto-abortion-access-bill/