A so-called grey area in the Covid-19 rules means bars and nightclubs have been hosting parties in the red light setting, free of masks or seated service. 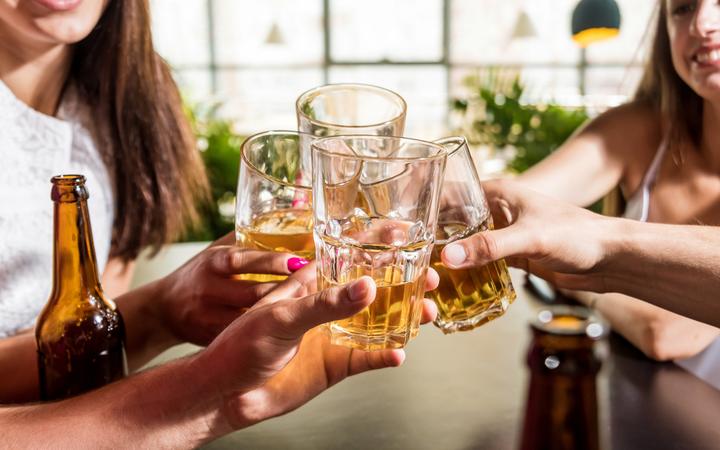 Some venues are bypassing the restrictions for hospitality by describing their events as "private" in social media advertisements, or selling tickets to join a "guest list".

According to Unite Against Covid-19 website, hospitality venues must keep their customers seated and distanced at red, with masks required unless outdoors, seated or while eating and drinking.

But for gatherings up to 200 people it advises "if you have exclusive use of a hospitality venue, then you do not need to follow the hospitality advice".

A search of social media reveals dozens of publicly-listed private events at bars and clubs around the country in recent weeks, ranging from raves, to a 'trance party', and one DJ's 'birthday bash'.

A man who owns two venues in Auckland and Waikato told RNZ he had been told about the "way of getting around" the normal restrictions by someone who did half a dozen parties in the last lockdown.

His bars had hosted two private parties since January - organised by promoters - with a third scheduled later this month.

"It does seem a bit weird that I can do that and there's no restrictions inside, that people can dance, and hang out... but with two venues, I've probably been affected [by the restrictions] more than anyone else in the country, I think," he said.

"I'm not prepared to take the p*** and have open [parties] because that would be catastrophic. I'd set myself up with a $15,000 fine. But for all intents and purposes, providing the venue is what I've been able to do."

He believed the third event would be a sell out, explaining that customers were happy to make up their minds about the risk of catching Covid.

"Essentially these businesses have not written the rules. We rely on the health advice provided by the experts in telling us what is acceptable and what isn't," she said.

But not all those running nightlife venues were on board with the idea.

Tim Ward, who owns the Wellington nightlife venues San Fran, Abandoned Brewery and Club 121, said he had heard of a number of private parties happening in Courtney Place bars and clubs.

He thought they seemed "clearly not permitted" under the red light rules, and said he was not interested in following suit.

"The risk is that my customers are angry that I'm behaving irresponsibly as a business owner, and start to look at my business as not something that they wish to support any more. It also leaves my staff exposed," he said.

Ward said it was somewhat understandable that other venues were taking that risk.

"Late bars, nightclubs and music venues - we're all doing extremely badly right now. They will be under intense pressure. And I understand why they'll be making poor decisions like this," he said.

However, he said the surge of private events should be exposed, because cutting out any potential spread of Covid-19 means all venues will get to open sooner.

In a statement, the agency in charge of Covid-19 compliance at venues said it had not taken action over private parties at nightclubs, to date.

"WorkSafe hasn't taken enforcement action for the behaviours you describe but will follow up under our 'educate first' approach if concerns are raised with us."

RNZ also asked it to clarify what a private event was, and if it was okay to advertise them.

"Under the Covid-19 Protection Framework at Red, when food and drink is being served patrons must be seated and separated and face covering rules apply. This applies whether a hospitality venue is operating 'normally' or hosting an event." it said.

RNZ also contacted the Department of Prime Minister and Cabinet for clarification, which referred to the comment from WorkSafe.

A popular Dunedin bar is sticking with Covid-19 vaccine passes even though they are not compulsory any more.

Woof bar owner Josh Thomas told Checkpoint that he was keeping a requirement for vax passes for the safety of staff and patrons.

He said his customers wanted him to keep the passes and he was expecting business to improve once punters knew that they were still required.

Thomas backed the cautious approach to lifting Covid-19 restrictions - but would love to get rid of table service.

Most of his staff have had Covid-19 and his business had been hit hard by the Omicron wave, he said.

He prefers a cautious approach to lifting Covid-19 restrictions - but would have liked to have seen a move to orange in the Covid-19 traffic light system - with vax passes still required.