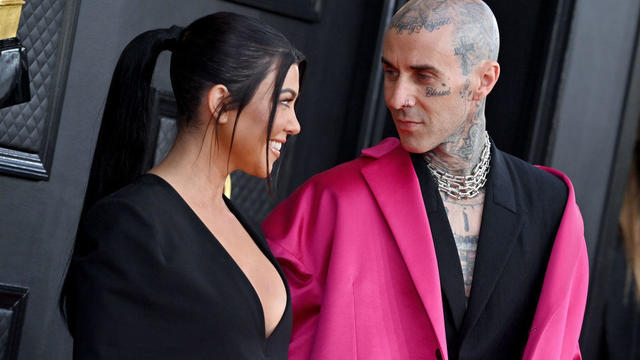 One of America's favorite goth couples has officially tied the knot. Travis Barker and Kourtney Kardashian held a small wedding after Sunday night's Grammys in Las Vegas, Entertainment Tonight reports.
During the ceremony, Barker took the stage in a special rock performance of "Are You Gonna Go My Way" with Lenny Kravitz and H.E.R. The wedding ceremony took place at a chapel following the award show, which was held at the MGM Grand Garden Arena.
Kardashian is best known as a member of her media mogul family while Barker is the rock drummer from Blink-182.
The couple wanted the ceremony to be "intimate and special," a source told ET. "Kourtney is super excited to get married to Travis. Both Kourtney and Travis are so looking forward to spending the rest of their lives together as soulmates."
Barker and Kardashian announced their engagement in October after a PDA-heavy romance. The Blink 182 drummer has credited his relationship with Kardashian with helping him get over his fears following a tragic 2008 plane accident. Barker and fellow artist DJ AM survived, but four others on the plane were killed.
"With you anything is possible," he wrote in an Instagram post.
Kardashian brings three children to the marriage, Mason, Penelope and Reign, whom she had with her ex-boyfriend Scott Disick. Barker has two children, Landon and Alabama.
Audiences who want to see more of the famed couple won't have to wait long. The two are heavily featured in the family's new reality series "The Kardashians," which premieres on April 14.
source: https://www.cbsnews.com/news/kourtney-kardashian-travis-barker-wedding-grammys/