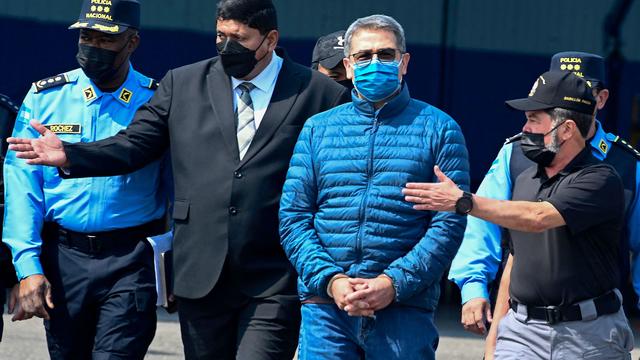 U.S. authorities have arrested and indicted former Honduran President Juan Orlando Hernández on drug and trafficking charges, after he was extradited to the United States Thursday.
Hernández faces charges of cocaine importation conspiracy, possession of machine guns and destructive devices, and conspiracy to possess machine guns and destructive devices.
"From at least in or about 2004, up to and including in or about 2022, Hernandez participated in a corrupt and violent drug-trafficking conspiracy to facilitate the importation of tons of cocaine into the United States," the indictment reads. "As part of the conspiracy, Juan Orlando Hernandez ... received millions of dollars from multiple drug-trafficking organizations in Honduras, Mexico and elsewhere, including from the former leader of the Sinaloa Cartel, Joaquin Guzman Loera, a/k/a 'El Chapo.'"
The indictment goes on to say, "Hernandez used those drug-trafficking proceeds to enrich himself, finance his political campaigns, and commit voter fraud, including in connection with the 2013 and 2017 Honduran presidential elections."
And in exchange, Hernandez protected drug traffickers, including his brother, the indictment claims.
"This case should send a message – to all political leaders around the world that trade on positions of influence to further transnational organized crime – that the DEA will stop at nothing to investigate these cases and dismantle drug trafficking organizations that threaten the safety and health of the American people," said Drug Enforcement Administration Administrator Anne Milgram.
The Honduran government carried out Hernández's extradition Thursday, and he was brought to New York by authorities to face charges, according to a senior U.S. official. Honduras' highest court cleared the way last month for Hernández to be sent to the U.S. after rejecting Hernández's appeal to stop the extradition.
Hernández was president from 2014 until his second term concluded in January. He was arrested in Honduras' capital city of Tegucigalpa in February.
source: https://www.cbsnews.com/live-updates/us-arrests-indicts-former-honduran-president-juan-orlando-hernandez/