U.K. says all options on table if Russia used chemical weapons in Ukraine 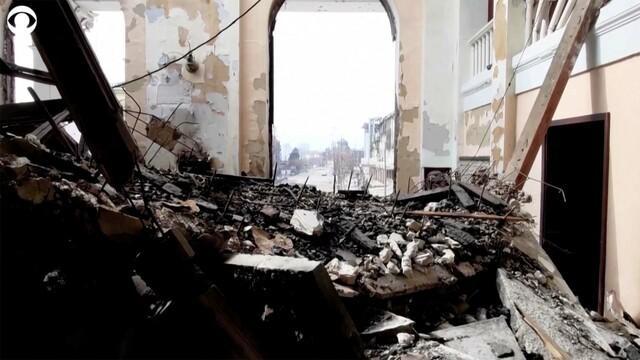 London — Britain's armed forces minister said Tuesday that "all options are on the table" for a Western response if Russia is found to have used chemical weapons in Ukraine. He spoke as unverified reports on social media alleged that Russian forces might have used chemical weapons in the besieged port city of Mariupol.
"If they were used, the Prime Minister, the President of the United States, the President of France and other world leaders have all been clear that that crosses a line and that all options are on the table for how we would respond," James Heappey told CBS News partner network BBC News.
On Monday, Ukraine's far-right Azov brigade, which was incorporated into the country's security forces several years ago, claimed a Russian drone had dropped a "poisonous substance" in Mariupol, and that people were experiencing neurological problems and respiratory failure.
"Three people have clear signs of poisoning by warfare chemicals, but without catastrophic consequences," the battalion's founder, Andrei Biletsky, said on social media.
Ukraine's Deputy Minister of Defense Hanna Malyar said the reports were being investigated.
"I can suggest that that was the phosphorus munitions, perhaps. The final and confirmed information will come later. But we have to understand that the risk of using chemical weaponry exists and is quite high," Maylar said on Ukrainian television.
"We are aware of social media reports which claim Russian forces deployed a potential chemical munition in Mariupol," Pentagon Press Secretary John Kirby said in a statement late Monday. "We cannot confirm at this time and will continue to monitor the situation closely. These reports, if true, are deeply concerning and reflective of concerns that we have had about Russia's potential to use a variety of riot control agents, including tear gas mixed with chemical agents, in Ukraine."
Heappey, Britain's armed forces minister, stressed that there could be a number of responses from the West.
"It's important to have some ambiguity, and it's also not for any government minister from an individual country to pledge NATO involvement," Heappey said. "It's perfectly possible that a response to chemical weapons use could happen without NATO. But all options being on the table is meant as a very clear deterrent to President Putin from using these weapons that are utterly appalling, cause huge suffering and misery, are completely indiscriminate and won't just affect troops — not that that's not bad enough — but could well affect women, children, civilians."
Military analysts say Russia's war in Ukraine has been marked by ineptitude and a lack of professionalism. Over the weekend, it seemed Moscow was trying to fix that problem. President Vladimir Putin's military — already accused of committing myriad war crimes in its failed attempt to capture the Ukrainian capital city of Kyiv — put General Alexander Dvornikov in charge of the ongoing invasion, a U.S. official confirmed to CBS News on Monday.
Dvornikov previously led Russia's forces in Syria, where the United Nations accused them of committing war crimes including airstrikes targeting civilian areas and infrastructure.
Under Dvornikov's command, Russia is switching its focus to eastern Ukraine's Donbas regions, where Ukrainian forces have already been fighting Russian-backed separatists for eight years. Just a few days ago a column of Russian vehicles at least eight miles long was spotted heading for the region. Mariupol is a vital port, and one of the biggest cities in Donbas.
Ukrainian President Zelenskyy said Monday that tens of thousands of Ukrainians were thought to have been killed in Mariupol alone after weeks of relentless Russian bombardment. As the city remains under siege, it hasn't yet been possible for people to emerge from their hiding places to take account of the true cost of Russia's assault.
Haley Ott is a digital reporter/producer for CBS News based in London.
source: https://www.cbsnews.com/news/ukraine-russia-war-chemical-weapons-claim-mariupol-uk-all-options-on-table/