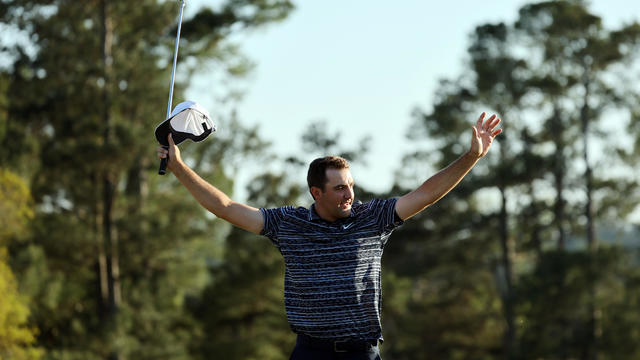 World No. 1 player Scottie Scheffler from Texas won his first major championship at Augusta on Sunday, finishing first at the Masters by three strokes over Rory McIlroy.
Scheffer finished at 10 under par after a double bogey on the 18th hole.
Scheffler came into the day with a three-shot lead, and he made sure it held up by closing with a 1-under 71. He finished at 10-under 278 overall, winning for the fourth time in his last six tournaments.
McIlroy, who is missing only the green jacket to complete the career Grand Slam, put together a spirited final round. His 8-under 64 included an unlikely birdie from the sand on the par-4 18th.
McIlroy's bogey-free trip around Augusta National matched the best final round in the history of the Masters and pushed him into second place at 7 under, trailing only Scheffler.
His round included six birdies and an eagle at the par-5 13th.
McIlroy's playing partner, Collin Morikawa, followed McIlroy's lead at the last hole, making birdie from the sand shortly after McIlroy pulled off the feat.
Early on, it looked like Scheffler might get pushed by Cameron Smith.
The Aussie closed within a shot after starting the round with two straight birdies. But Scheffler chipped in for an unlikely birdie at No. 3, Smith made bogey and it wasn't really close after that two-shot swing. Smith's last hurrah was a birdie at the tough 11th hole that brought the margin back to three shots.
But the Aussie promptly dumped one in the water at the famous 12th hole in Amen Corner, leading to a triple-bogey that finished off his chances. Smith trailed by three on the 12th tee but knew immediately his tee shot was in trouble. It splashed short of the green. His pitch from the penalty area sailed long to drop him well off the pace at 4 under.
Meanwhile, just 14 months after a horrific car crash, Tiger Woods completed all 72 holes at Augusta and pledged to play the historic British Open at St. Andrews in July, according to CBS Sports. Woods told Sky Sports that he wouldn't "be playing a full schedule ever again," but he will play big events.
"I don't know if I'll play [the PGA Championship] at Southern Hills or not," Woods said. "But I am looking forward to St. Andrews. That's something that's very near and dear to my heart. I've won two Opens there. It's the home of golf. It's my favorite golf course in the world. So, I will be there for that one. Anything in between that, I don't know, I will try. There's no doubt — I will try to get ready for Southern Hills, and we'll see what this body is able to do."
Woods was limping through the final round, but he still walked up the 18th fairway, removed his cap and acknowledged roars from the patrons at Augusta National.
He wasn't even close to winning the Masters. And it didn't matter.
Woods shot a 6-over round of 78 on Sunday in the final round. He finished at 13 over for the week, his total of 301 by far his worst at the Masters and one shot off his worst 72-hole score ever as a professional.
source: https://www.cbsnews.com/news/scottie-scheffler-masters-2022-champion/