Watch Live: Biden to announce new round of military aid to Ukraine 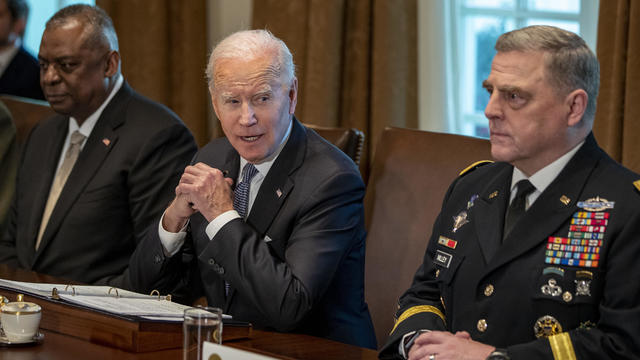 Washington — President Biden is poised to announce Thursday that the U.S. will provide another round of security assistance to Ukraine, a White House official confirmed to CBS News, as the war with Russia enters in next phrase with Russian forces continuing their large-scale offensive to take control of Ukraine's east.
The official said the latest package of military assistance will be similar in size to the $800 million in aid that Mr. Biden announced last week, and will include heavy artillery and ammunition. The Associated Press first reported the president's plans to provide the new aid, which Mr. Biden will announce in morning remarks from the White House.
The new package of security assistance adds to the roughly $2.6 billion the U.S. has already sent Ukraine to help bolster its defenses against Russia, which has mounted continuing assaults in a new effort to seize control of the Donbas region in eastern Ukraine.
During a meeting with top military officials at the White House on Wednesday, Mr. Biden praised their "exceptional" work in equipping and arming Ukrainian fighters as they defend their nation from Russia's invasion.
"I knew they were tough and proud, but I tell you what, they're tougher and more proud than I thought," Mr. Biden said of the people of Ukraine. "I'm amazed what they're doing with your help, in terms of providing advice and weaponry we're providing, along with the rest of NATO. Weapons and ammunition are flowing in daily.  And we're seeing just how vital our alliances and partnerships are around the world."
As Ukraine braces for this phase of the war after Russian troops suffered earlier setbacks, a growing number of allies and partners have joined the U.S. in rushing to send military supplies and weapons into the country.
Ukrainian soldiers are also learning to use howitzers sent by the U.S., a senior defense official said Wednesday, and numerous flights carrying military equipment from the $800 million package announced last week arrived in the region over the past few days.
Canadian Prime Minister Justin Trudeau on Tuesday pledged his country will send heavy artillery to Ukraine as it faces the assault by Russia in the east, and Dutch Prime Minister Mark Rutte said earlier this week that he told Ukrainian President Volodymyr Zelenskyy the Netherlands will be sending "heavier material" to Ukraine, including armored vehicles.
source: https://www.cbsnews.com/live-updates/biden-ukraine-military-aid-artillery-ammunition-watch-live-stream-today-2022-04-21/