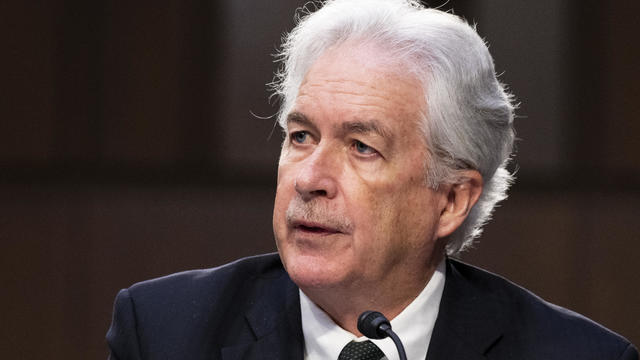 CIA Director William Burns on Thursday decried "horrific" crimes committed by Russian forces in Bucha and throughout Ukraine, warning that subsequent phases of the war, soon to enter its eighth week, would involve continued bloodshed.
"The last chapter in Putin's war has yet to be written, as he grinds away in Ukraine," Burns said in prepared public remarks to mark his first year in office. "I have no doubt about the cruel pain and damage that Putin can continue to inflict on Ukraine, or the raw brutality with which Russian force is being applied."
Speaking to students and faculty at the Georgia Institute of Technology, Burns called China, led by President Xi Jinping, "a silent partner in Putin's aggression" and said it posed the "greatest challenge" confronting the U.S.  and "the most profound test that CIA has ever faced."
In his remarks, Burns described several broad challenges the agency would have to address in what he called a "new era" — characterized, he said, by an increasingly adversarial China, a "pugnacious and revisionist" Russia, and other mounting technological, climate and global health threats.
"CIA will have to reimagine itself to compete successfully in this new age," he said.
A career diplomat who previously served as U.S. ambassador to Russia, Burns spoke at length about the "immediate" threat posed by the Kremlin's aggression, and called Russian President Vladimir Putin an "apostle of payback" whose appetite for risk has grown as his circle of trusted advisers has shrunk over the years.
"Every day, Putin demonstrates that declining powers can be at least as disruptive as rising ones," he said.
Burns recounted how he came away "troubled" from an interaction with Putin in November, when President Biden dispatched the CIA chief to Moscow to warn the Russians of the consequences of potential military action in Ukraine.
"While it did not yet seem that he had made an irreversible decision to invade Ukraine, Putin was defiantly leaning in that direction, apparently concerned that his window was closing for shaping Ukraine's orientation," Burns said.
He said Putin appeared convinced at the time that the Ukrainians would quickly submit; that his own military could achieve victory "at minimal cost;" that Europeans would remain "risk-averse" and that his own economy was "sanctions-proofed" by massive foreign currency reserves.
"When he launched his war seven weeks ago, Putin was proven wrong on each of those counts," Burns said.
He said scenes in Mariupol and Kharkiv, under weeks-long assault by the Russians, were "sadly reminiscent" of images he witnessed in Grozny, Chechnya, as a young diplomat in the winter of 1994.
"But Ukrainian will is unbroken, and Putin's Russia has inflicted massive material and reputational damage on itself," he said.
Burns extolled what he said was the largely unseen work of U.S. intelligence officers and repeatedly lauded the effects of the Biden administration's policy of publicly releasing declassified intelligence about Russia's plans, which he said had "paid off in some important ways."
"By being open with some of our secrets, we made it harder for Putin to obscure the truth of his unprovoked and vicious aggression," Burns said, adding that the success of the strategy reflected the need for "new thinking and new tactics" in a uniquely demanding era for intelligence.
Last week, the intelligence community broadened the scope of the intelligence it was sharing with Ukraine to reflect changing tactical realities and address a looming Russian offensive in the east and south of the country, according to U.S. officials.
"We are intensely sharing timely intelligence with the Ukrainians to help them defend themselves throughout their country, including in areas held by Russia before the 2022 invasion," a U.S. intelligence official told CBS News.
Burns said during a question-and-answer session Thursday that earlier "rhetorical posturing" by the Kremlin about the potential use of nuclear weapons had not, to date, been matched by "practical evidence" of deployments or military dispositions, but said the CIA would "watch for that very intently."
He also said the agency would boost the resources it dedicated to China, which, he said, sought to overtake the U.S. "in literally every domain." He said the CIA aimed to "double" the number of its Mandarin-speaking officers and increase overseas posts focused on Beijing.
"Nothing will matter more to our long-term success as an intelligence agency than how well we compete with the [People's Republic of China] and how well we organize ourselves for that competition over the next few years," Burns said.
source: https://www.cbsnews.com/news/cia-director-william-burns-decries-russia-crimes-ukraine/