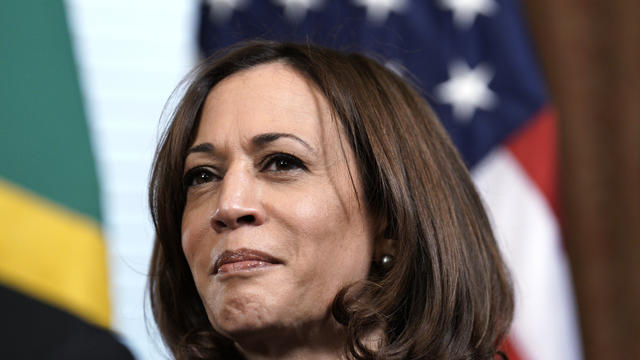 Vice President Kamala Harris' chief of staff Tina Flournoy is leaving the Biden-Harris administration and will be replaced by veteran White House staffer Lorraine Voles, a White House official tells CBS News.
Voles has been a senior adviser to the vice president since last summer and served as communications director for former Vice President Al Gore. A White House official says Flournoy recruited Voles to work in Harris' office. Flournoy has served as Harris' chief of staff since the beginning of the administration.
"Tina has been a valued advisor and confidant to me and tremendous leader for the office," Harris said in a statement. "From day 1, she led our team during a historic first year as we made progress rebuilding our economy here at home and our alliances around the world. Tina is the consummate public servant and I will continue to rely on her advice, counsel and friendship."
White House chief of staff Ron Klain also called Flournoy a "critical member of the White House team since day one."
"We are done for now" with staff changes, a person familiar with the comings and goings in the vice president's office tells CBS News, stressing that the 15-month mark of the Biden presidency and the forthcoming midterm and presidential elections are historically a good jumping-off point for some and opportunity for others to join the ranks of or move around in an administration. The changes in Harris's office also precede anticipated shuffling and turnover in the West Wing, with White House Press Secretary Jen Psaki, among others, eyeing the exits in the coming weeks.
Voles' promotion comes as Harris has seen turnover on her communications and national security teams in recent weeks. Jamal Simmons, a former CBS News analyst, took over for Symone Sanders as communications director earlier this year. Philip Gordon, a Clinton and Obama administration veteran, is now national security adviser after Nancy McEldowney stepped down. Rebecca Lissner, a former National Security Council official, joined the vice president as deputy national security adviser this week. And Dean Lieberman, a former State Department official, also joined recently as a special adviser and speechwriter.
Kathryn Watson contributed to this report.
Tim Perry is a reporter covering the White House for CBS News Digital.
source: https://www.cbsnews.com/news/kamala-harris-chief-of-staff-tina-flournoy-exits-administration/