Shanghai lockdown lifted for some, but millions still trapped and angry 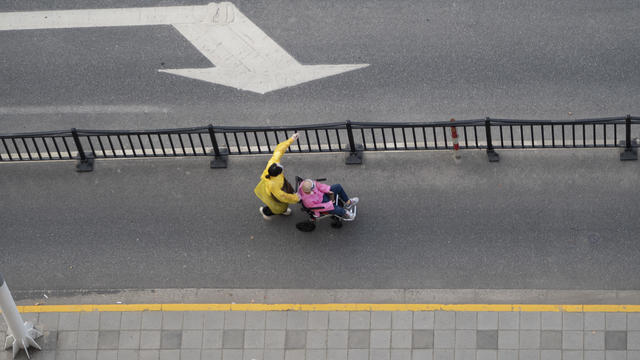 Tokyo — The U.S. State Department has ordered all non-emergency consular staff to leave China's largest city, Shanghai, as the global business hub enters its third week of lockdown in response to a surge in COVID-19 cases. The U.S. Embassy in Beijing said it was ordering the departure because of the outbreak in Shanghai and as American diplomats had raised "concerns about the safety and welfare of U.S. citizens" in the city.
"It is best for our employees and their families to be reduced in number and our operations to be scaled down as we deal with the changing circumstances on the ground," a statement from the embassy said, according to The Associated Press.
Shanghai officials reported more than 23,000 new coronavirus cases on Tuesday. The vast majority of them are asymptomatic, but despite that, and some limited easing of the restrictions, the government has largely stuck to its strict lockdown and isolation measures — even as it battles public anger, food shortages and a major impact on business.
China's central government has bristled at criticism of its tactics from the U.S. and Europe, insisting over the weekend that its draconian "zero-COVID" policy was "effective and scientific."
Analysts at the global financial services firm Nomura estimated that as many as 45 cities in China were implementing either full or partial lockdowns as of Tuesday, impacting more than a quarter of the country's overall population, according to the Reuters news agency.
As CBS News senior foreign correspondent Elizabeth Palmer reports, Shanghai is under the single biggest COVID lockdown in the world. For more than two weeks, the megacity of more than 25 million people has been eerily quiet.
The only bustle is at food depots, where there's a daily race to deliver groceries to millions of people who haven't been allowed out to shop.
Amid an outcry from residents, city authorities on Tuesday did allow people in some COVID-free neighborhoods to leave their homes, and officials said some pharmacies and grocery stores would reopen, too.
A local news outlet said fewer than 7 million Shanghai residents were being liberated, however, and details on who would be freed and when remained murky.
American Billy Stockton, who lives and works in Shanghai, is among the millions who have been confined to their apartments since late March.
"No one knows where to get stuff," he told Palmer. "No one knows where to get medical help… and it's creating panic, fear and, just, instability."
There have been angry protests — rare anywhere in China — in areas where food ran out. Videos posted to social media show crowds of frustrated residents shouting, "we're starving!"
Last week, a man vented his fury in a video recorded on his phone, and then uploaded online.
"What am I supposed to buy," he shouted. "What do I eat? You're driving us to our deaths!"
Small groups of residents have now been allowed out over the past couple weeks, but only briefly, for COVID testing. Anyone who tests positive has no choice: As one patient showed on TikTok, they had to board a special bus and then check into a government-run mass-isolation center.
The authorities are clearly ready to quarantine an onslaught of new cases, even as they release old ones who are now testing negative.
But for the recently released, it's a false sense of freedom. The roughly 6,000 people who were let out of isolation centers on Monday headed straight back into lockdown at home.
Looking out of Billy Stockton's window, however, there was no sign of that. He was busy taking stock of his dwindling food supply.
"I have sausages and then they supplied a bag of rice yesterday, so simple stuff like that," he said of his meal plan.
"It's like a movie," he told Palmer, saying he felt like he was trapped in a nightmare. "I just can't believe I'm in this. It's beyond surreal. You kind of have to pull yourself out of it to get through it."
Like millions of other Shanghai residents, Stockton has no choice but to just get through it.
That could take another couple of weeks, however, and the question is whether there will be lasting fallout among Shanghai's massive population, who have rarely, if ever, felt so mistreated and abused by their government.
source: https://www.cbsnews.com/news/shanghai-covid-lockdown-china-eased-for-some-millions-trapped-angry/