A 10-year-old rural border collie has a miraculous tale of survival after being washed down the raging Waitaki River. 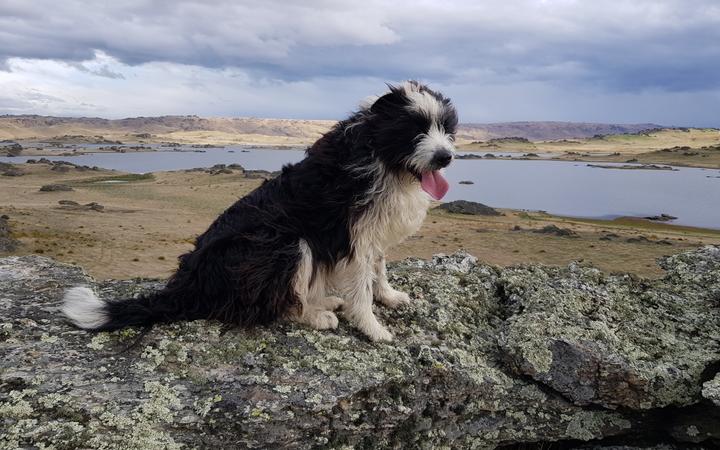 Chilli and owner Wally Dundass, who live in the small township Waitaki Bridge near Oamaru, went fishing last Wednesday as they normally do, when Chilli got distracted by some birds.

"We were just on our way back from another unsuccessful attempt to catch up to one of those elusive salmon," Dundass said.

"She was playing with a stick in the water but then noticed some geese to chase.

"I was walking back to the car and thought she'd be a couple of minutes behind.

"She usually turns up, and five minutes later she hadn't turned up, and I thought' Oh, that's a bit unusual', so I backtracked and tried to call her but she never came.

"So I knew she'd been washed down the Waitaki River"

Dundass went to a nearby boat ramp where a fellow fisherman launched his boat to search the river.

"Again there was no sign of her. I went and got my son and we did another search on foot that afternoon, with no luck, so we went home a bit defeated.

"I was thinking God, how am I going to tell my daughter I've lost our beloved pet?"

Dundass said his daughter wasn't at home that night so he wasn't able to give her the bad news - luckily as it turned out.

Unable to sleep that night Dundass woke up early on Thursday and and made himself a coffee before heading out to work in his shed.

"I opened the back door about 4am and guess who was sitting there looking a bit sorry for herself and soaking wet!"

Chilli had miraculously made it home.

"I'm assuming she's washed ashore somewhere, has made it onto one of the many tracks down there by the river, walked to Glenavy and then has somehow crossed the busy Waitaki Bridge on State Highway 1 before making it a few more kilometres to our place."

"We're so thankful she's home, we had her looked over by the vet, she was a bit sore but is doing fine.

"She's already been out fishing again but she's sticking a bit closer to me now.

"I'm just grateful and really thankful for the people that helped me look for her."