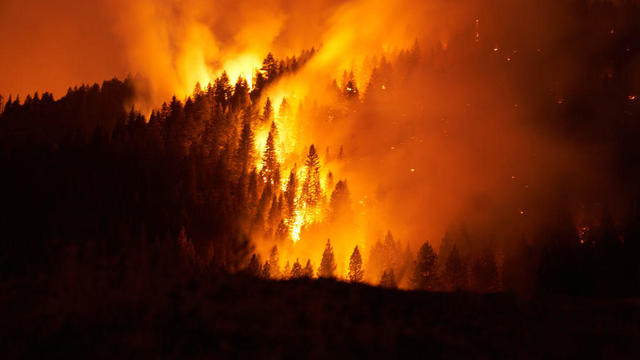 San Francisco —  Pacific Gas & Electric, the nation's largest utility, has agreed to pay more than $55 million to avoid criminal prosecution for two major wildfires sparked by its aging Northern California power lines and to submit to five years of oversight in an attempt to prevent more deadly blazes.
The company didn't acknowledge any wrongdoing in the settlement announced Monday with prosecutors in six counties ravaged by last year's Dixie Fire and the 2019 Kincade Fire. The utility still faces criminal charges for a 2020 wildfire in Shasta County that killed four people.
The civil settlements are designed to accelerate payments to hundreds of people whose homes were destroyed so they can start rebuilding more quickly than those who suffered devastating losses in 2017 and 2018 blazes ignited by PG&E's equipment. Those fires prompted the utility to negotiate settlements that included $13.5 billion earmarked for victims - money that still hasn't been completely distributed.
The deal also thrusts the utility back into five years of independent oversight, similar to the supervision PG&E faced during its criminal probation after it was convicted of misconduct that contributed to a natural gas explosion that killed eight people in 2010.
Sonoma County District Attorney Jill Ravitch said the oversight was the biggest accomplishment to come from the settlement.
"We have limited tools and criminal law to deal with corporations and what we were able to do here was to get a five-year agreement that they will be overseen, that there will be an independent monitor, and that they will have to meet certain benchmarks," she said Monday.
All told, PG&E has been blamed for more than 30 wildfires since 2017 that wiped out more than 23,000 homes and businesses and killed more than 100 people.
PG&E's federal probation ended in late January, raising worries from the federal judge who tried to force the utility to reduce fire risks by requiring more maintenance and reporting. U.S. District Judge William Alsup warned that PG&E remained a "continuing menace to California" and urged state prosecutors to try to rein in the company that provides power to 16 million people.
In a joint statement covering five of the six counties that settled, prosecutors said PG&E will be "essentially on a five-year probation" to be overseen by Filsinger Energy Partners, which already acts as a safety monitor for California power regulators.
PG&E will have to underwrite the federal monitor's costs, up to $15 million annually, in addition to the $55 million in other payments and penalties that the utility expects to incur in the settlement.
As part of their settlement, Sonoma County prosecutors agreed to drop 33 criminal charges filed last year that accused PG&E of inadvertently injuring six firefighters and endangering public health with smoke and ash from the Kincade Fire that began in October 2019.
Fire officials said a PG&E transmission line sparked the fire, which destroyed 374 buildings in wine country and caused nearly 200,000 people to flee as it burned through 120 square miles, the largest evacuation in county history.
Prosecutors in the other five counties were exploring criminal charges in last year's Dixie Fire before cutting the deal that they said will result in far larger payouts than if they'd hauled PG&E into court. Because there were no deaths in the Dixie Fire, prosecutors said the utility would have paid a maximum penalty of about $330,000 if it had been found guilty in a criminal case.
Ravitch said state laws that limit punishment against a corporation to probation and fines helped motivate the settlement. She said if PG&E had been successfully prosecuted in the Sonoma County case it would have paid a fine of just $9.4 million, most of which would have gone to the state.
Instead, the county will now receive more than $20 million earmarked for nonprofits that help people affected by wildfires and for Santa Rosa Junior College so it can expand fire safety and vegetation management programs. It will also reimburse the DA's office for the costs of investigating and litigating the case, she said.
Even when PG&E pleaded  guilty to 84 felony counts of involuntary manslaughter f or the deaths in the 2018 Camp Fire, the company was fined just $3.5 million.
In a statement, PG&E CEO Patti Poppe said the utility welcomed the chance to be more transparent - and ultimately more accountable - for its operations.
"We are committed to doing our part, and we look forward to a long partnership with these communities to make it right and make it safe," Poppe said.
The money that that PG&E will pay as part of the settlements will account for a just sliver of its anticipated liabilities in the Kincade, Zogg and Dixie fires. As of December 31, PG&E estimated it will likely be held responsible for at least $2.3 billion in losses stemming from those wildfires. Some of the estimated $1.15 billion in damages caused by the Dixie Fire may be paid by a state-backed insurance fund that California lawmakers created after PG&E filed for bankruptcy in 2019.
The Dixie Fire burned nearly 1 million acres in Butte, Plumas, Lassen, Shasta, and Tehama counties and destroyed more than 1,300 homes and other buildings. The blaze started on July 13, 2021 when a tree hit electrical distribution lines west of a dam in the Sierra Nevada, according to investigators with the California Department of Forestry and Fire Protection.
The settlement for the Dixie Fire was made by district attorneys in Plumas, Lassen, Tehama, Shasta and Butte counties, which will receive nearly $30 million.
Although her office participated in the Dixie Fire settlement, Shasta County District Attorney Stephanie Bridgett said she will continue to pursue a criminal case related to the Zogg Fire, which killed four.
source: https://www.cbsnews.com/news/pge-55-million-dollars-old-power-lines-two-major-wildfires-dixie-fire-kincade/