A group of antivax and anti-mandate protesters have been given an ultimatum by the Dunedin City Council - pack up and leave, or be moved on. 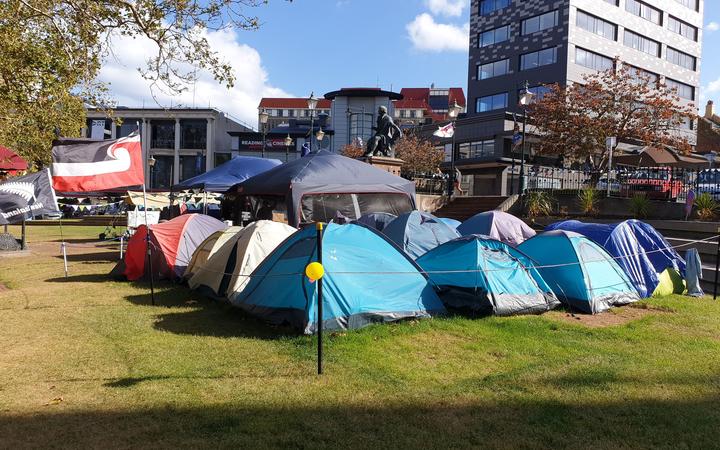 The small group began the occupation of the city's upper Octagon on 11 February, ostensibly in support of the larger protest in Wellington.

But with most mandates lifted and the council's own vaccine pass requirements scrapped, they have now outstayed their welcome.

The council issued a directive to the protesters yesterday to remove their tents and structures and to not light any more fires or be trespassed.

The group have until noon on Monday, when council staff, assisted by police officers, will move in.

Dunedin Mayor Aaron Hawkins said he hoped it would not come to that.

"We're encouraging them to leave voluntarily and I know police will be working with them over the weekend to encourage them to make that decision. No one wants to see a confrontation in the middle of the city centre but there comes a time when we're left with few other options."

But it was fair to say the protesters had not taken the message well, interrupting and confronting Hawkins as he was interviewed by Newshub yesterday. 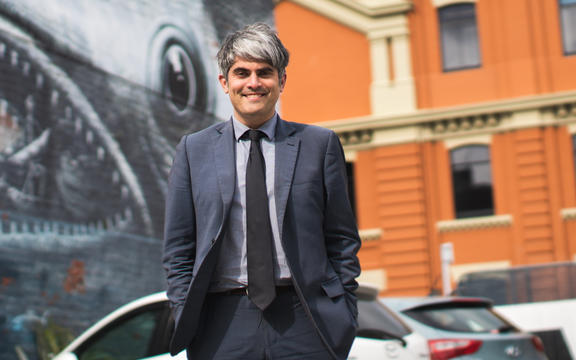 Hawkins was philosophical about the situation.

"They weren't particularly enthusiastic about my presence in the lower Octagon speaking to the media, who they're equally sceptical of. People are angry and that isn't allowing them to be the best version of themselves . . . but it isn't something that particularly concerns me."

But he was not the only subject of their ire.

Police were called when the removal of a portaloo led to a confrontation between the group and the worker who came to collect it.

An 8-year-old boy then kicked the worker in the leg before running back into his tent.

"They were unhappy that their toilet facilities were being taken away but obviously the council and the business that was supplying it have decided they've had their time and as a result it's time to move on. So the council has turned off the power and that portaloo has been taken away."

Police were still investigating the matter and were yet to speak to the young boy and the protester, Bond said.

The Dunedin group is among the last of the occupations which were set up in the wake of the convoy and protest at Parliament in early February.

It has not attracted wide-scale support with the number of occupants generally sitting in single figures. 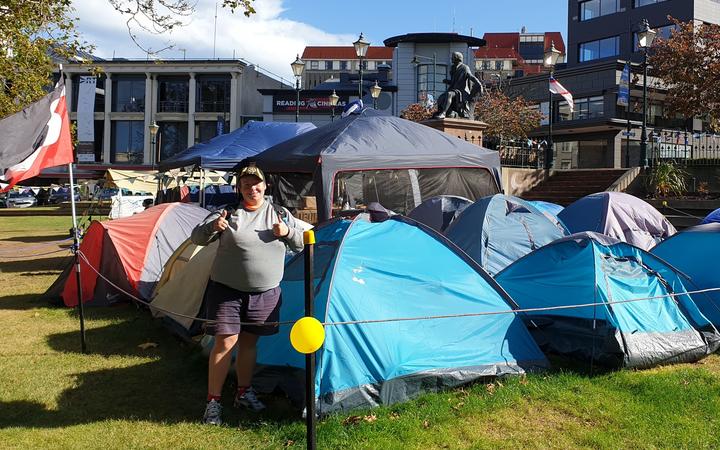 A protester at the site in the Octagon. Photo: RNZ / Tim Brown

A group of protesters met with the police this afternoon.

Bond said the council would be leading any trespass action, but police officers would work with them.

"The council will take the lead with removing the structures but we will be there as a presence just to ensure the peace is kept and it doesn't become hostile, and to ensure the safety of all those present."

The council had required vaccine passes to enter its public facilities, but that requirement ended on Tuesday.

When RNZ visited the Octagon today, there were about half a dozen protesters, who did not wish to speak to us.

About a dozen tents were set up along with a couple of gazebos.

The protesters provided a statement saying they wanted an end to all Covid-19 legislation and vaccine passes - even among private business.

"We have not been visited by the mayor or any other official in regard to our demands, but have had a positive experience from members of the Dunedin City Council and NZ police so far. We have welcomed in thousands of people for a cup of tea and a chat over our time here and had great support from local businesses, families and the wider community.

"There have been a few assaults and damage to our property but most of the abuse is from intoxicated and or generally unhappy people, usually saying 'get vaxxed' or 'go home'. On the whole people are encouraging," part of the statement read.

"No I'm not just prepared to pack up and go. Not until we, at the very least, get some kind of acknowledgement from our elected officials.

"It seems that we've just been all brushed aside as if we're not important. We might as well be invisible. There's a lot of harm that's been caused to people."

There were rumours of reinforcements showing up over the weekend.

So what will confront council staff and police officers on Monday remains unclear.

The Christchurch City Council said a group of anti-mandate protesters camping in earthquake damaged red-zone land have now been told to leave the area.

The group have been camping at the site in Burwood since the start of the month.

The council had said it needed to determine if the land was considered a park, and therefore subject to the council's Parks and Reserves Bylaw.

The council's head of parks Andrew Rutledge said legal advice is that the bylaw does apply, and they have told the group they need to leave.