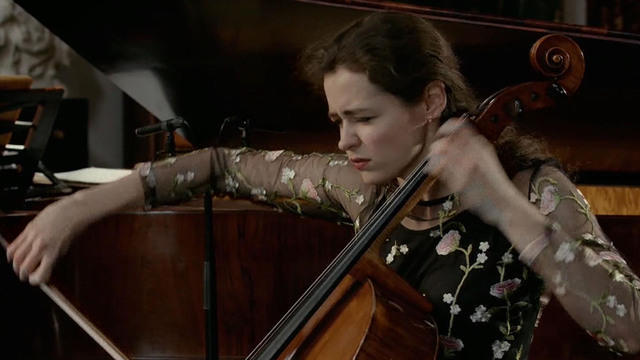 Venues across the West are shunning Russian musicians, ballet dancers and films in protest of the war in Ukraine. A Russian cellist, who performed with a Ukrainian pianist and denounced the invasion as "horrifying" and unjustified, said organizers canceled her Switzerland concert, citing her nationality.
"I find it so controversial and so not necessary. I mean, what would this cancellation change in terms of global situation?" musician Anastasia Kobekina told CBS News.
In sports, Russians have also been sidelined. The country's teams are banned from international soccer and hockey tournaments and the Paralympics. Russian tennis players were also barred from participating in the Wimbledon tournament Wednesday.
Sporting events inside Russia, like racing and tennis, have also been canceled by organizers.
Analyst Jonathan Eyal of the Royal United Services Institute said such boycotts work a lot like economic sanctions — they penalize Russian people for the actions of their president.
"None of this is, of course, going to change the Putin regime's policies, but it's a daily reminder to ordinary Russians about how isolated their country really is now," said Eyal, noting that this has happened before.
In 1980, the U.S. and its allies boycotted the Moscow Olympics after the Soviet Union's invasion of Afghanistan. Four years later, the USSR retaliated by skipping the games in Los Angeles.
"The sportsmen and women and the artists that are banned are sometimes the biggest unintended victims in this showdown," Eyal said. "If you are a citizen of that state, you are treated as part of that state."
Since the war in Ukraine began, Russian soprano Anna Netrebko and conductor Valery Gergiev have lost prestigious jobs after refusing to distance themselves from Russian President Vladimir Putin.
Russian-German pianist Igor Levit said most Russian artists have nothing to do with Putin and shouldn't be punished for staying silent, since speaking out could endanger lives.
"It's an absolute insanity to strip concerts away from young Russian musicians just because they're afraid," Levit said.
Levit and Russian rapper Oxxxymiron have put on concerts to raise money for Ukrainian refugees. The "Grandfather of Russian Rock" Boris Grebenschikov also called the war "madness."
When asked if she's afraid for her family in Russia, Kobekina told CBS News, "Of course, because we don't know what the next day would bring us."
But despite that fear, Kobekina said she will keep showing solidarity with Ukrainians.
source: https://www.cbsnews.com/news/russian-artists-athletes-banned-protest-ukraine-war/