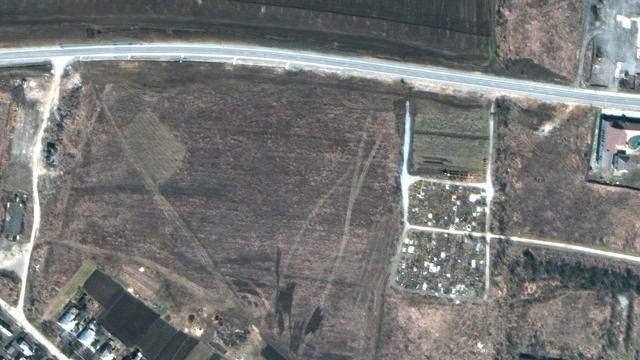 Humanitarian law appears to have been "tossed aside" in the war in Ukraine, said a spokesperson for the United Nations' high commissioner for human rights Friday, and that the agency's "work to date has detailed a horror story of violations perpetrated against civilians."
"First and foremost, this senseless war must stop. But as the fighting shows no sign of abating, it is vital that all parties to the conflict give clear instructions to their combatants to strictly respect international humanitarian law and international human rights law," U.N. Human Rights spokesperson Ravina Shamdasani said in a briefing to journalists.
Satellite images released late Thursday appeared to show more than 200 new graves in a town where Ukrainian officials say the Russians have been burying Mariupol residents killed in the fighting. The eastern port city of Mariupol has seen some of the worst suffering of the war, and the imagery, from Maxar Technologies, showed long rows of graves stretching away from an existing cemetery in the town of Manhush, some 12 miles from Mariupol.
Local officials accused Russia of burying up to 9,000 Ukrainian civilians in mass graves in an effort to conceal the slaughter taking place in the city, which has been under siege since the early days of the war.
"The bodies of the dead were being brought by the truckload and actually simply being dumped in mounds," Piotr Andryushchenko, an aide to Mariupol's mayor, said on Telegram.
There was no immediate reaction from the Kremlin on the satellite pictures. When mass graves and hundreds of dead civilians were discovered in Bucha and other towns around Kyiv after Russian troops retreated three weeks ago, Russian officials denied that their soldiers killed any civilians there and falsely accused Ukraine of staging the atrocities.
People fleeing Mariupol have described being trapped in horrible conditions. Yuriy and Polina Lulac said they spent nearly two months living in a basement with at least a dozen other people with no running water and little food.
"What was happening there was so horrible that you can't describe it," said Yuriy Lulac, who used a derogatory word for the Russian troops, saying they were "killing people for nothing."
"Mariupol is gone. In the courtyards there are just graves and crosses," he said.
"Over these eight weeks, international humanitarian law has not merely been ignored but seemingly tossed aside," Shamdasani said.
The U.N. High Commissioner for Human Rights' mission in Ukraine has verified 5,264 civilian casualties, including 2,345 deaths, since the war began on Feb. 24. It said that 92.3% of those were recorded in Ukrainian government-controlled territory. The office uses strict methodology and has long acknowledged that its confirmed figures are far short of the real numbers.
"The actual numbers are going to be much higher" as more details emerge from places such as Mariupol where there is intense fighting," Shamdasani said.
"Almost every resident in Bucha our colleagues spoke to told us about the death of a relative, a neighbour or even a stranger. We know much more needs to be done to uncover what happened there and we also know Bucha is not an isolated incident," Shamdasani said.
The office said in a statement that "Russian armed forces have indiscriminately shelled and bombed populated areas, killing civilians and wrecking hospitals, schools and other civilian infrastructure - actions that may amount to war crimes." It added that the U.N. mission also has "documented what appears to be the use of weapons with indiscriminate effects, causing civilian casualties and damage to civilian objects, by Ukrainian armed forces in the east of the country."
On April 9, U.N. human rights officers visiting Bucha documented the unlawful killing, including by summary execution, of around 50 civilians.
"The scale of summary executions of civilians in areas previously occupied by Russian forces is emerging," Shamdasani said. "The preservation of evidence and decent treatment of mortal remains must be ensured, as well as psychological and other relief for victims and their relatives."
The U.N. mission has received more than 300 allegations of killings of civilians in previously occupied towns in the Kyiv, Chernihiv, Kharkiv and Sumy regions.
The U.N. rights office said its mission also has recorded 114 attacks on medical facilities "although the actual figure is likely to be considerably higher."
"We estimate that at least 3,000 civilians have died because they couldn't get medical care and because of the stress on their health amid the hostilities," Shamdasani said. "This includes being forced by Russian armed forces to stay in basements or not being allowed to leave their homes for days or weeks."
The U.N. mission so far has received 75 allegations of sexual violence against women, men, girls and boys by Russian soldiers, most in the Kyiv region. The human rights office said detention of civilians "has become a widespread practice" in areas controlled by Russian forces and affiliated groups, with 155 such cases reported so far.
It said it also received information about "alleged arbitrary and incommunicado detentions" by Ukrainian forces or people aligned with them. And it pointed to videos put out by both sides apparently showing the intimidation, interrogation, torture or killing of prisoners of war.
"Those in command of armed forces must make it clear to their fighters that anyone found to have been involved in such violations will be prosecuted and held accountable," Shamdasani said.
source: https://www.cbsnews.com/news/un-horror-story-human-rights-violations-ukraine-civilians/