Amazon had almost half of U.S. warehouse injuries in 2021, unions say 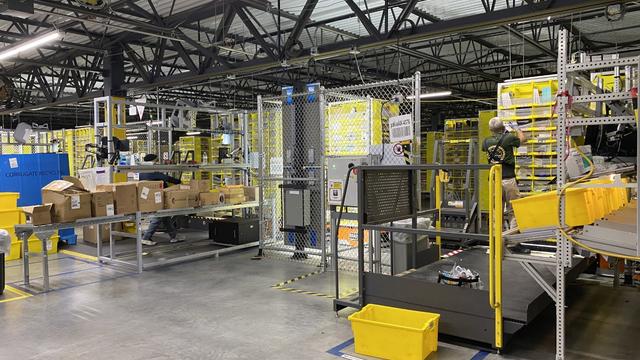 Nearly half of all injuries recorded in U.S. warehouses in 2021 occurred at Amazon,  according to a report released Tuesday by a coalition of unions.
"Amazon employed one-third of all warehouse workers in the U.S., but it was responsible for nearly one-half (49 percent) of all injuries in the warehouse industry," according to the report by the Strategic Organizing Center (SOC).
The report said U.S. Amazon workers sustained more than 34,000 "serious injuries" on the job last year, a rate more than twice as high as that at warehouses not owned by the e-commerce giant.
The coalition said it relies on data provided by Amazon to the U.S. Occupational Safety and Health Administration, the federal agency responsible for preventing workplace injuries.
The group didn't immediately respond to an AFP request for comment.
"After relaxing some of its discipline systems in the first months of the COVID-19 pandemic, Amazon reimplemented its monitoring systems and production pressures in late 2020, and its injury rates rose substantially," the SOC said.
Hiring at Amazon has spiked during the pandemic.
In the United States, the company has gone from some 700 sites in 2020 to more than 900 in 2021, and from more than 200,000 employees in 2017 to over 560,000 in 2021, according to the report.
In June 2021, Amazon changed working conditions at its U.S. sites, including longer breaks for its workers who prepare, ship and deliver packages.
That decision came after a previous damning SOC report and an attempt to unionize at an Amazon warehouse in Alabama. That failed, but the campaign exposed what many employees described as the company's infernal pace.
"We need a better vision for our employees' success," wrote Amazon founder Jeff Bezos in an annual letter to shareholders in 2020.
"We are going to be Earth's Best Employer and Earth's Safest Place to Work," he promised.
But "in stark contrast to Jeff Bezos' recent pledge ... the injury rate at Amazon facilities increased by 20 percent between 2020 and 2021," the SOC said.
In March, workers at a JFK warehouse in New York voted to launch the first U.S. union at Amazon.
source: https://www.cbsnews.com/news/amazon-almost-half-injuries-us-warehouses-2021/