3-year-old falls to her death from 411-foot waterfall 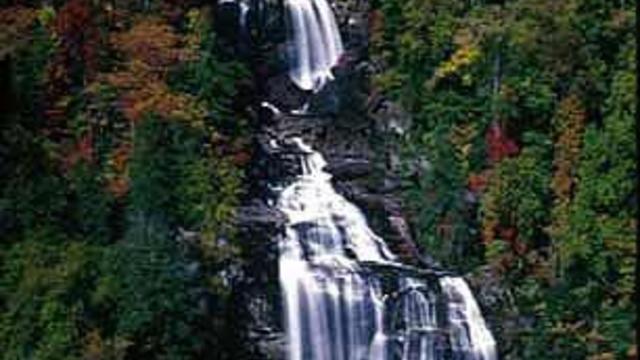 A 3-year-old child died when she went over a waterfall on the border of North and South Carolina. Nevaeh Jade Newswanger and her family were visiting Whitewater Falls on Sunday morning when she was swept away in the water at the top of the falls and the current carried her over, according to a press release from the Jackson County Sheriff's Office.
Emergency responders from multiple counties were dispatched to the falls and rescue operations began. By just before nightfall, rescuers located the child, who was deceased and trapped in an area of the waterfall. Her body was recovered on Monday after operations throughout the night and early morning.
The family is from Pennsylvania but is living in Oconee County, South Carolina, while working in the area.
Whitewater Falls is the highest waterfall east of the Rocky Mountains, with a 411-foot plunge, according to the U.S. Forest Service. The area has rugged terrain and difficult access. It has remained wild and undeveloped over the years.
Visitors are allowed to access the area, which includes picnic tables, for a small fee. The Forest Service says the best views of the falls are seen from two overlooks, but over the years some people have ventured off the trail to look for better views.
"Tragically, several of these people fell to their deaths or suffered serious injuries at Whitewater Falls. Please stay on the trails," the Forest Service says.
In 2020, 24-year-old hiker Chandler Manuel died when he fell from a rope into the bottom of Whitewater Falls. Then a member of the search team, 71-year-old Eldon Jamison, fell to his death while trying to help recover the body, county officials said in a statement.
In a statement about Newswanger, Jackson County Sheriff Chip Hall offered his condolences to the family.
He urged visitors to "always remain at a distance, follow safety precautions and warnings which are in place, and view waterfalls from designated viewing areas."
"With the onset of spring weather we need to be reminded of the dangers associated with many scenic areas of the region such as waterfalls," Hall said. "While beautiful to view from a safe distance, venturing out closer to the falls for any reason brings tremendous danger."
CBS News has also reached out to the Forest Service for more information and is awaiting response.
Caitlin O'Kane is a digital content producer covering trending stories for CBS News and its good news brand, The Uplift.
source: https://www.cbsnews.com/news/nevaeh-jade-newswanger-waterfall-death-whitewater-falls-north-carolina/