Worker who died after being pulled into plane engine was warned, report states 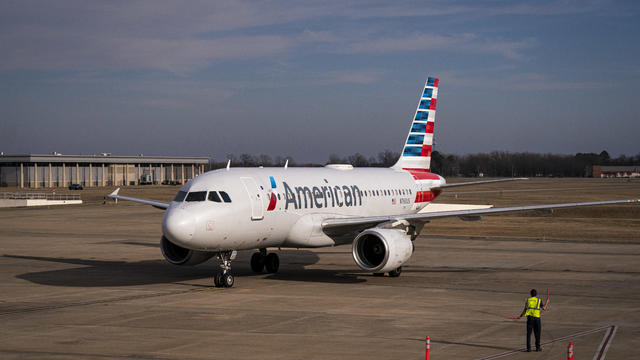 An airline worker who died in December after being sucked into a plane's engine was repeatedly warned about the engine and told not to get close, an investigation by the National Transportation Safety Board found. The incident happened shortly after an American Eagle flight from Dallas landed at Montgomery Regional Airport in Alabama.
The ground crew reported that they held a safety briefing about 10 minutes before the airplane arrived at the gate, according to the report. They also held a second safety "huddle" shortly before the airplane arrived, reiterating that the engines would remain running until ground power was connected.
The flight crew had elected to leave both engines running during the two-minute engine cool-down period.
The crew discussed that the engine should not be approached and the safety cones should not be set until the engines were off, spooled down – meaning their speed decreased – and the airplane's rotating beacon light had been turned off.
When they pulled into the gate, the first officer opened his cockpit window to inform the ramp agent that the engines were still on.
The captain told the first officer that he would keep the seatbelt sign on until they connected to ground power and shut down the No. 1 engine, on the left side of the plane.
However, immediately after that, he saw a warning light come on and felt the plane shake violently. The No. 1 engine immediately shut down.
A ramp agent had been "pulled off her feet and into the operating engine," which killed her, the report states.
During the investigation, a ramp agent told the safety board he tried to warn a crew member, whom he saw almost fall over from the engine exhaust as she set a safety cone near the back of the plane. He said he attempted to alert her to stay back and wait for the engines to be shut down.
Another ramp agent said he saw a crew member about to set the safety cone at the rear of the airplane, and he yelled and waved her off because the engine was still running. He said she began to move away from the airplane, but shortly after, he heard a "bang" and the engine shut down.
This agent also saw another ramp agent approach the forward cargo door and he knelt to wave him off.
Surveillance video shows the airplane's upper rotating beacon, a warning light, appeared to be on throughout the incident, according to the report. It also shows the ramp agent walk along the edge of the left wing, directly in front of the engine.
Staying away from the engine is also part of the American Eagle Ground Operations Manual, which states: "To Keep Employees Alive and Aircraft Intact, You Will: NEVER approach an aircraft to position ground equipment next to an aircraft or open cargo bin doors until the engines are shut down and the rotating beacon(s) turned off, except when conducting an approved single engine turn."
The 15-foot area in front of an engine is called the "ingestion zone," according to the safety board. "You must never enter the ingestion zone until the engine has spooled down," the agency says, adding that spooling down can take 30 to 60 seconds, depending on the aircraft type. "You must wait until you can clearly see the individual fan blades before entering the ingestion zone."
The woman who died was an employee of American Airlines/Piedmont Airlines.
"We are saddened to hear about the tragic loss of a team member of the AA/Piedmont Airlines," airport Executive Director Wade Davis said in a statement. "Our thoughts and prayers are with the family during this difficult time."
Caitlin O'Kane is a digital content producer covering trending stories for CBS News and its good news brand, The Uplift.
source: https://www.cbsnews.com/news/airline-worker-died-sucked-into-plane-engine-ntsb-report/