Australia's most exceptional athletes reside in football-devout Melbourne, although they don't perform in stadiums, nor do they feature on the nightly news. 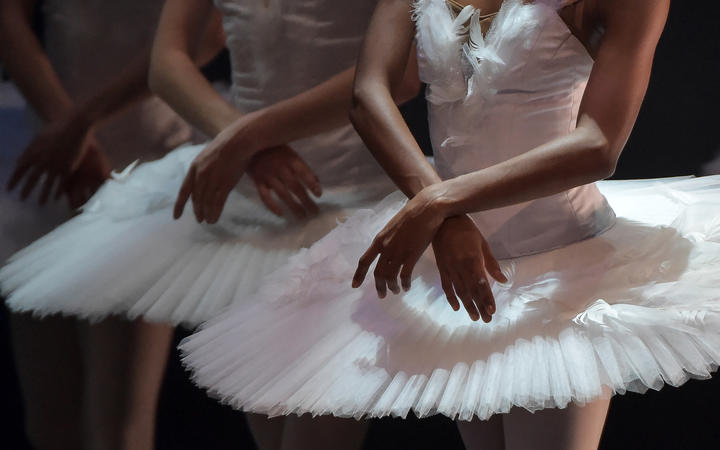 They're the dancers of The Australian Ballet company.

Measuring physical feats of ballet dancers against professional sports is difficult because dancers cannot wear GPS devices on stage and who else does a grand jeté en manége?

Observers can only wonder.

An American in Paris audiences have recently been marvelling of the performers' superior athleticism and endurance.

How many sportspeople could do four shows - or games - in one weekend?

Some former athletes and health professionals understand both disciplines.

"Having been on the other side of the fence, it's incredible the amount of work they put in just to get out onto the stage," former North Melbourne footballer Sam Wright says.

As an injured player, Wright spent time rehabilitating with dancers. He has since been employed at the ballet as a welfare boss. 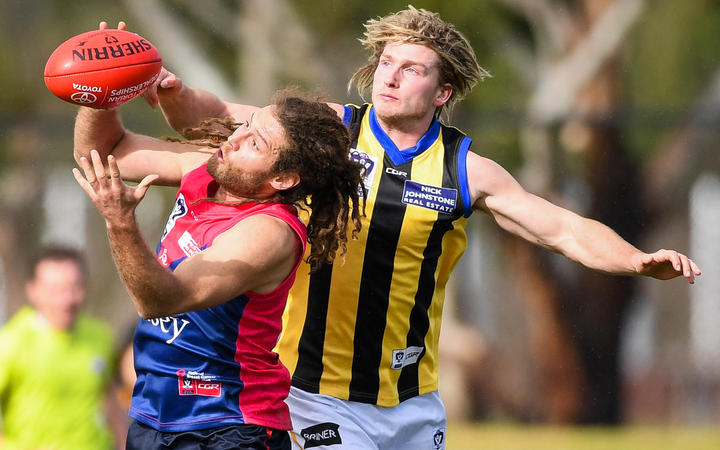 "My initial thought coming in here to rehab was embarrassment," he says.

"I thought I was working hard [in football].

"They're way ahead of most because in sport you don't have the diversity of movement, and you also, in dancing, have the expectation that it's got to be pretty seamless, and you can't show the effort," she says.

"Footballers show their strength, and you can hear it and you can see it on their faces, and we've got to produce all sorts of movement without necessarily showing how it might feel."

"I like to think of them as athletic artists. They're artists first and foremost, but they're incredible athletes," she says.

"They can jump higher than anyone, they spend hours working … there's no other athlete who spends as many hours training."

Most people don't realise dancers who perform in the evenings have already spent a whole day doing their exercises and often rehearsing for the next production. On long days, they can punch in for work at 9.30am and clock off at 11pm.

Dr Mayes did not discount the excellence and work ethic of sportspeople.

"We do see other elite athletes in here as well," she says.

"They've got their own skills. Luckily these guys don't get any body contact, because I think that's a known cause of injury. Obviously, the athletes are better runners generally.

"[But] I think the dancers' precision can't be matched. Their balance, their strength through full range of movement. I bring in athletes … they are usually blown away with the hours [dancers] spend.."

When ABC Sport visited, she was helping principal dancer Joey Romancewicz with his rehabilitation.

"Bringing Joey back," she says.

"We'll be really closely monitoring what he's doing. Not only in each section of the day but within a class."

Romancewicz, built like an Olympic decathlete, is making a comeback from a foot injury known as Lisfranc for his lead role in Anna Karenina in Sydney.

Injuries to Australian ballet dancers are rare [one anterior cruciate ligament injury in 15 years], although they were more common during pandemic lockdowns.

"That comes from doing classes at home," Romancewicz says.

"Jumping off tiles instead of wood sprung floors."

It's a problem that will see lingering effects.

Dr Mayes leads a team of specialists, including Connelly, who manage athletes to prevent and minimise injury. 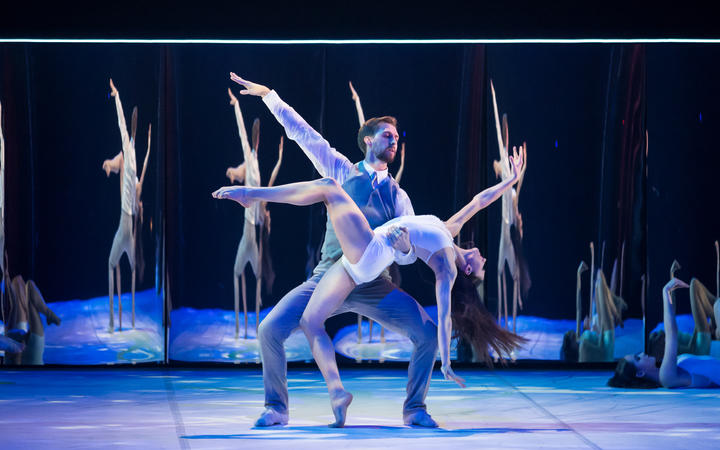 This is where art and professional sport view performance through the same binoculars: recovery is everything.

"I'm the ballet part of the rehab," Connelly says.

"We have our physios, our myos [myotherapists] and our rehab physios that do the conditioning. We have a strength and conditioning person as well. My role is to bring the dancer back into the studio."

Dr Sue Mayes smiles at the camera with dancers completing exercises behind her.

Connelly said this side of the business had excelled since she performed in the 1990s.

"I was a dancer with the company," she says.

"I've broken both fifth metatarsals. I've been through that process. We didn't have the same set up as we have now. We've got a whole team of people the dancers can lean on - at that stage we just had a physio."

"There was probably a reticence for dancers to report pain or to report injury," Connelly says.

"We had in the 90s and in the 80s that old fashioned idea of just soldier on and push through it."

"We needed someone at the head who could say, hey, it's OK if there's something wrong, because we are building a team that can help you get better," she says.

"By that happening we were able to intervene much earlier and injuries didn't become as exacerbated.

"So that's why our [low] injury rates are just phenomenal because we have the early reporting.".

"Dancers traditionally spent a whole of time doing lots of stretching," she explains.

"We had all these calf stretches in each studios. So, we educated them years ago on not stretching and just getting the strength up.

"And that's really had an incredible impact on our injury rates. We've rarely had to operate on an ankle since. And we rarely lose dancers to availabilities - it's rare for us to have a dancer that is off."

Ballet companies all around the world have since adopted this practice, which improves muscle strength and endurance.

Connelly says colleagues in the northern hemisphere pay homage to the breakthrough from Down Under.

"I know that American Ballet Theatre are doing the calf rise program, The Royal Ballet [England] are doing their calf rises," she says.

Then came the shake-up in hips.

This would disprove the long-held belief that all dancers would end up with arthritic hips.

"We looked over five years to see the impact of the hip joint and we found that dancers' hips tolerated five years of really extreme loading really well," Dr Mayes says.

"We were also able to demonstrate that they've got strong hip muscles. It supports the concept that if you've got strong muscles around the joint, it can be protective against developing arthritis."

Resistance training might seem obvious for non-artistic athletes, but dance has a different history.

"Joey doesn't want to bulk up - because it is harder to get those movements and not jump high but what we've been able to demonstrate is with the exercises, especially the endurance ones, is that you don't get bulky.

"It's really hard to significantly change the shape of a person. And, so, we're constantly trying to reduce that fear. We've been doing it for so long, and they've recognised that our strongest dancers, our most resilient, are our best performing dancers. They've seen it for themselves."

Former Kangaroos player Sam Wright has Dr Mayes to thank for being able to play on late into his career.

Recruited to play in the AFL from the Victorian country town of Katamatite, Wright wore a North Melbourne jumper in 136 games over eleven seasons.

The last few years of his career were troubled by injury.

In one traumatic fortnight, he tore all the ligaments in an ankle, got a pain killing injection to play the next week and hurt the other leg.

"I spent a year and half, two years out of the game," he says.

After several surgeries, the spring-loaded backman was confined to a wheelchair.

Wright went to the ballet to seek Dr Mayes' help.

"We heard about the things Sue was doing with other elite athletes around the world and especially in ankles," he says.

"We sought her out and I remember walking in here. My toes were sticking up in the air because I didn't have tendons, couldn't wear shoes."

Dr Mayes told Wright: "We can get you can back playing."

He did eight months of successful rehab surrounded by dancers.

"My first game was 701 days [after the injury] against Sydney," he says.

He played for another two seasons.

During this period, Wright started to value education and work experience in welfare development, and when he finished playing footy, he went back to the ballet.

"We'd been working on a well-being program for the ballet and from there we did a pilot program around well-being, career and personal development, and by the end of the year I was full time," he says.

He was astonished by the emotional strain of first class dancing.

"The day-to-day pressure that they're put under from a critique point of view from class to rehearsal to everybody competing for a spot, the amount of reviews and criticisms and feedback that they get is huge."

"And they're ranked as well," he says.

"From principals down to core dancers, so there's that side of it as well.

"For me, it's about concentrating on creating those support structures but also their career and personal development."

When Wright first started his professional development program there were nine of 78 dancers studying for life beyond the stage. There are now more than 50.

"All of a sudden we've created a culture where the stress is taken away for life after dance and they can concentrate on performing," he says.

He recalled the "daunting feeling" of having no planned future, an anxiety common to professional sport.

"Trying to get dancers to reach their potential on and off stage."

Wright's admiration for the dancers' physical prowess has only been enhanced during his time at the Southbank studios. 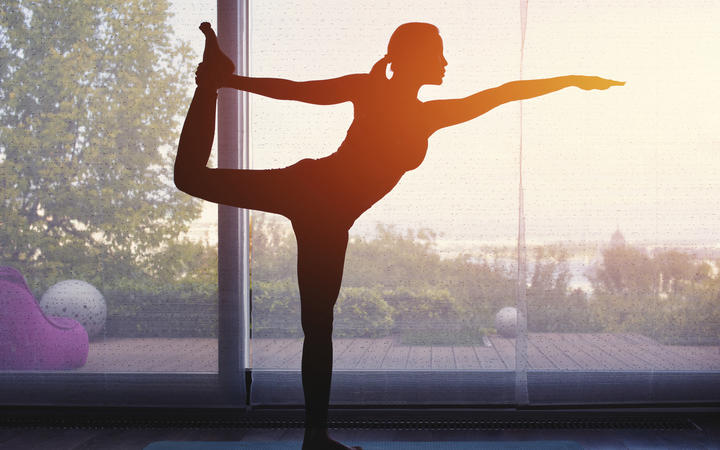 Yoga and Pilates are popular for strength and rehab. Photo: AFP

He cannot believe the dancers recover so quickly between shows.

"In AFL we have a 20 minute light run in the morning and then play the next day, yet these guys are flat out all day and then perform at seven o'clock at night," Wright says.

"That was biggest thing that struck me - the lack of time to recover, but they're still expected to go out there and put on world class performances.

"And you've seen how athletic and powerful and brilliant these dancers are. I love AFL. But I've found a new love in this world."

Meanwhile, professional sports clubs will continue to send their athletes to the ballet for treatment.

There is no hubris in any of this, rather a mutual respect.

"It's great to bring the athletes in," Dr Mayes says.