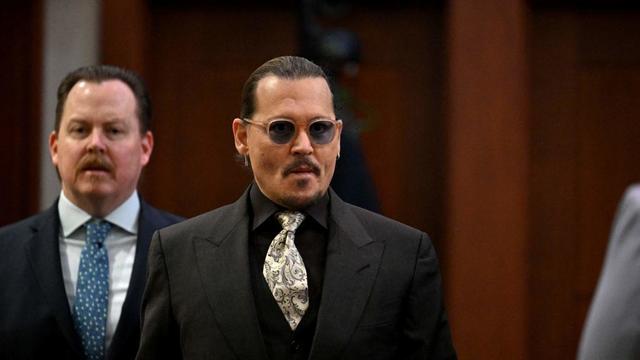 Johnny Depp is set to take the stand Tuesday in his libel suit against ex-wife Amber Heard. Depp filed suit against Heard over an op-ed piece she wrote in The Washington Post in 2018 in which she called herself as a "public figure representing domestic abuse."
Depp isn't mentioned by name in the article, but he has claimed in the suit that Heard's allegations in the article directly link him the person she claims physically abused her, according to the Associated Press. The actor has consistently denied the allegation against him.
Now, he is expected to testify on Tuesday, again denying Heard's claim, but this time in front of a pool of carefully selected jurors. He is suing for $50 million. Heard has countersued, claiming Depp directed his lawyers to defame her in the legal process.
The article doesn't mention Depp by name, but Depp says it clearly alludes to him and other public allegations Heard has levied toward him. Depp denies the accusations.
During the trial, several associates of both Heard and Depp have given testimony about the couple's former relationship and violent interactions. On Monday, Dr. David Kipper, a therapist who once treated both Depp and Heard and still continues to treat Depp, denied ever being told about or witnessing abuse between Heard and Depp, according to the Associated Press.
Kipper also said that in March 2015, Depp told him that he had accidentally sliced off the tip of his finger in an accident, which required surgery. But later, Depp alleged that the injury actually happened because Heard threw bottles of vodka at him, the Associated Press reports.
The testimony comes after years of ongoing legal battles involving Heard and Depp over allegations that the two were engaged in a violent and abusive relationship.
In 2020, Depp lost another libel case against British tabloid The Sun for branding him a "wife-beater" in their coverage of his and Heard's divorce. "I have found that the great majority of alleged assaults of Ms. Heard by Mr. Depp have been proved to the civil standard," U.K. Judge Andrew Nicol said in his ruling against Depp.
Depp's lawyers have argued during this trial that Heard's allegations are both untrue and have done intense damage to Depp's image and career. The actor was let go from both the "Pirates of the Caribbean" and "Fantastic Beasts" following public backlash.
Now, Depp and his lawyers are working to prove that Heard physically and emotionally abused the actor. Depp's lawyers have also said they brought the case in Virginia in part because the laws here are more favorable to their case, according to the Associated Press.
The trial is expected to last through the month.
source: https://www.cbsnews.com/live-updates/johnny-depp-amber-heard-allegations-lawsuit-fairfax-watch-live-stream-today-2022-04-19/