Missing Guardsman who tried to save migrants in river is identified 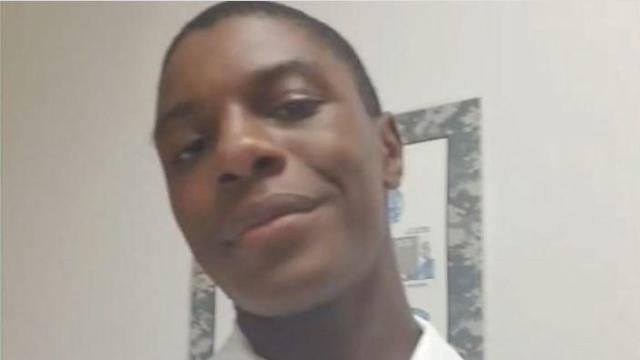 The name of a Texas National Guard member who remains missing after going into the river along the U.S.-Mexico border to help two migrants who appeared to be drowning was released on Sunday by officials. The Texas Military Department identified the missing Guard member as Specialist Bishop E. Evans, 22, from Arlington.
Evans went missing on Friday as he jumped into the Rio Grande near Eagle Pass along the U.S.-Mexico border in a section of the river known to have strong currents.
Republican Gov. Greg Abbott's called Evans a "hero who risked his life in service of Texas and America."
Texas National Guard Specialist Bishop Evans is a hero who risked his life in service to Texas & America.
Law enforcement & rescue teams continue a relentless search for him.
Join us in prayer for a successful recovery.
Updates will be provided when they become available. pic.twitter.com/nULof4gcwl
Evans is assigned to A Battery, 4-133 Field Artillery Regiment in New Braunfels, the Texas Military Department said in a statement. He joined the Texas Army National Guard in May 2019. Evans left Texas but returned in 2020 after taking part in Operation Spartan Shield in Kuwait.
Dive teams had stopped their operations Saturday evening due to the river's strong current. Three airboats from the Texas Department of Public Safety helped with the search on Sunday.
The Texas Military Department said Evans was trying to rescue the two migrants when he disappeared.
Maverick County Sheriff Tom Schmerber said Evans took off his jacket and left his radio before going into the water around 8:30 a.m. Friday.
"He jumped in the river," Schmerber said. "They never saw him come out."
The two migrants were taken into custody by U.S. Customs and Border Patrol. According to the military department, authorities believe the migrants were involved in drug smuggling.
One of Evans' friends told CBS DFW she was not surprised by the guardsman's heroic actions.
"He's done a lot of good and his main motive is to help others," Kaitlyn told the station.
Evans was assigned to Gov. Abbott's sprawling border security mission, known as Operation Lone Star, which has deployed thousands of Guard members across Texas' 1,200-mile southern border since launching last year. The multibillion-dollar operation also includes a heavy presence of state troopers and authorizes Guard members to help make arrests.
The mission has come under scrutiny over migrants sitting in border jails for months on trespassing charges and low morale among Guard members over living conditions, long deployments and little to do.
Migrant rescues are common in the river along the Texas border, and the attempted crossings are also sometimes deadly.
In 2019, a tragic photograph showed a young father and his daughter who died trying to cross the Rio Grande in south Texas.
source: https://www.cbsnews.com/news/bishop-evans-missing-texas-guardsman-tried-to-save-migrants-river/