Independence leader and Nobel laureate Jose Ramos-Horta has declared victory in Timor-Leste's presidential election, saying that he had secured "overwhelming" support and would now work to foster dialogue and unity. 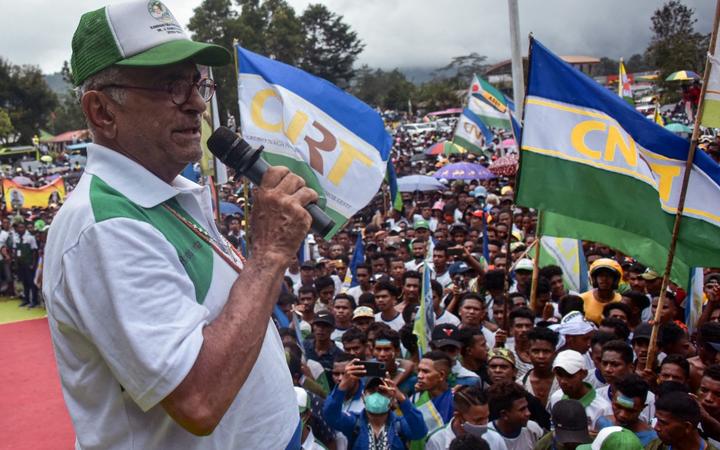 Independence leader and Nobel laureate Jose Ramos-Horta has declared victory in Timor-Leste's presidential election, saying that he had secured "overwhelming" support and would now work to foster dialogue and unity.

"I have received this mandate from our people, from the nation in an overwhelming demonstration of our people's commitment to democracy," Ramos-Horta told reporters in Dili.

The 72-year-old statesman is one of Timor-Leste's best known political figures and was previously president from 2007-12, and prime minister and foreign minister before that.

Addressing concerns over political instability in the country, Ramos-Horta said he would work to heal divisions in Timor-Leste.

"I will do what I have always done throughout my life... I will always pursue dialogue, patiently, relentlessly, to find common ground to find solutions to the challenges this country faces," he said.

Ramos-Horta said he had not spoken to his election rival Lu Olo, but had received an invitation from the president's office to discuss a handover of power.

Home to 1.3 million people, the half-island and predominately Roman Catholic nation of Timor-Leste has for years grappled with bouts of political instability and the challenge of diversifying its economy, which is largely dependent on oil and gas.

Ramos-Horta said he expected Timor-Leste to become the 11th member of the regional bloc the Association of Southeast Asian Nations (ASEAN) "within this year or next year at the latest."

The president-elect, who will be inaugurated on 20 May, the twentieth anniversary of the country's restoration of independence, said he would work with the government to respond to global economic pressures, including the impact on supply chains from the war in Ukraine and Covid-19 lockdowns in China.

"Of course, we start feeling it here in Timor Leste. Oil prices went up, rice went up, that is a reality of what has happened in the world It requires wise leadership."