Two climbers fall to their deaths in Utah canyons 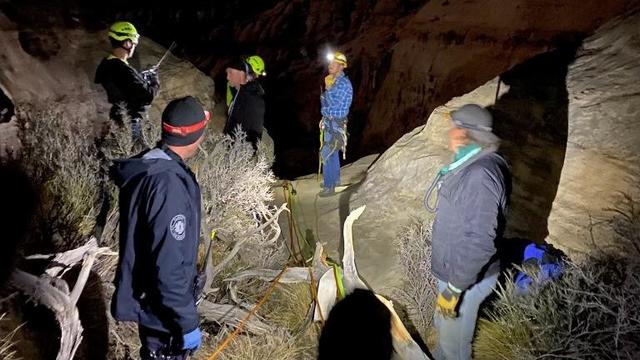 Two men fell to their deaths over two days at separate canyons in Utah in what local authorities called a "tragic weekend in Emery County."
On Saturday, 41-year-old Arlo Lott Jr., of Steamboat Springs, died after falling about 70 feet when his rappel anchor broke loose in Farnsworth Canyon,  the Emery County Sheriff's Office said.
Emery County Search and Rescue, the Emery County Sheriff's Office and Goblin Valley State Park staff hiked into the area and rappelled down to Lott, who was taken out of the canyon by helicopter.
Sheriff's officials say his condition quickly deteriorated, and "the medical flight crew administered lifesaving measures for nearly one hour before pronouncing the man dead at the scene."
It was the second climbing death in the county in as many days.
On Friday, in Upper Black Box, 50-year-old Craig Barlow was watching his friends rappel when the ledge of a cliff he was sitting on broke loose. He fell about 50 feet.
A rescue helicopter was able to land on a shelf in a tight area farther up the canyon and paramedics made their way down the canyon through water to reach Barlow, sheriff's officials said.
Barlow, of of Salt Lake City, was carried up the canyon to an area where they were able to climb up a 40-foot sandy embankment and make their way to the helicopter.  He was transported to a hospital where he died from his injuries.
"Emery County Sheriff's Office expresses sincere condolences to the families and friends of these two men," officials said in a statement, alongside image of the rescue missions. "We also appreciate all agencies who responded to these two tragic accidents."
The Associated Press contributed to this report.
source: https://www.cbsnews.com/news/two-climbers-fall-to-their-deaths-canyons-utah/