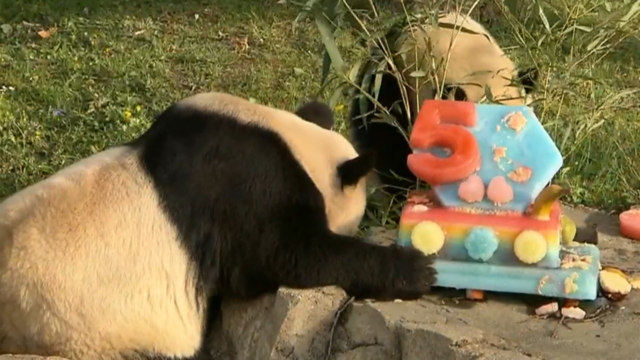 The most famous residents of the National Zoo in Washington, D.C., celebrated half a century of panda diplomacy with China on Saturday, marking the milestone with a cake made from frozen fruits and vegetables.
The first pair of giant pandas — Ling Ling and Hsing Hsing — arrived at the National Zoo in April 1972, as a gift from the Chinese Premier to then-First Lady Pat Nixon.
"I think they're adorable, endearing creatures," Nixon said at the time.
It's now been 50 years since the pandas first tumbled, chomped, flopped, waddled and wrestled their way into the hearts of Americans.
"It's 50 years of one of the world's most successful conservation programs," said National Zoo director Brandie Smith.
But success took a while. Ling Ling and Hsing Hsing didn't mate for more than a decade — and none of the five cubs they produced survived for more than a few days. Ling Ling died in 1992, and Hsing Hsing died in 1999.
But those early heartbreaks led to some crucial discoveries. In 2000, the zoo's second pair of pandas — Mei Xiang and Tian Tian — arrived in D.C., and scientists began learning more about their reproductive systems.
"Females are only viable for about two days a year," Smith said. "And so to study that and understand it, it's not a big window."
"Now we literally track the hormones," Smith added. "So we watch the hormones change. And we can pinpoint to the minute when the best time for this panda to reproduce is."
The result? Tai Shan in 2005, Bao Bao in 2013, Bei Bei in 2015 and Xiao Qi Ji in 2020.
All of the babies have grown up under the watchful eye of about 2 million visitors each year — along with millions more who tuned in via the zoo's round-the-clock "Panda Cam."
To celebrate the half-century mark, zookeeper Nick Schiraldi whipped up the pandas' favorite treat: cakes made from frozen fruit juice, apples, pears, sweet potatoes and lots of bamboo.
"The baby loves the cakes," Schiraldi said. "It's a new thing! He gets to smash 'em, roll 'em around…"
This baby, like the others before him, will have to return to his ancestral home before his fourth birthday, per the zoo's agreement with China. But with any luck — and a lot of science — we'll be falling for a new baby sometime soon.
Nancy Cordes is CBS News' chief White House correspondent.
source: https://www.cbsnews.com/news/giant-pandas-national-zoo-50-year-anniversary/