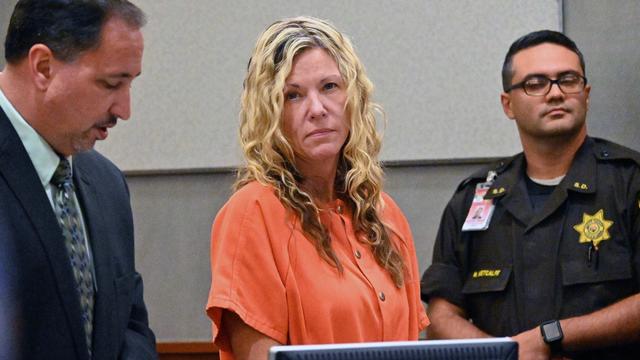 An Idaho judge ruled Monday that a mother accused of conspiring to kill her children, her estranged husband and a lover's wife is now mentally competent to stand trial on some of the charges in Idaho.
Lori Vallow Daybell and her new husband, Chad Daybell, face numerous charges in the complicated case involving allegations of bizarre spiritual beliefs involving "zombies" and doomsday predictions.
Prosecutors have said that Lori and Chad Daybell espoused the religious beliefs in an effort to encourage or justify the murders.
The case against her had been hold for months after Judge Steven Boyce ordered her committed to a mental facility so she could undergo treatment in an effort to make her mentally fit enough to assist in her own defense.
Boyce's new order said Lori Vallow Daybell "is restored to competency and is fit to proceed" in the Idaho murder case. He did not provide other details about her treatment or mental condition.
She is scheduled to be formally arraigned in court next week and both Lori and Chad Daybell are set to stand trial together early next year.
They are charged with conspiracy to commit murder and first-degree murder in connection with the deaths of Lori Daybell's children 7-year-old Joshua "JJ" Vallow, 16-year-old Tylee Ryan, as well as Chad Daybell's first wife, Tammy Daybell.
Lori Daybell is also charged in Arizona with conspiring to kill her former estranged husband, Charles Vallow, with the help of her now-deceased brother, Alex Cox.
Chad Daybell has pleaded not guilty to the charges and Lori Daybell has not yet had an opportunity to enter a plea. Chad Daybell's attorney, John Prior, declined to comment on the case. Lori Daybell's attorney, Jim Archibald, did not immediately respond to voice and email messages requesting comment.
An indictment said Chad and Lori Daybell, while still married to other people, began espousing an apocalyptical system of religious belief in 2018.
Lori Daybell's brother Alex Cox shot and killed her estranged husband, Charles Vallow, in suburban Phoenix, according to an indictment in Arizona.
Cox asserted the shooting was in self-defense, and he was never charged. At the time, Charles Vallow was seeking a divorce, saying his wife believed she had become a god-like figure responsible for ushering in the biblical end of times. Cox later died of an apparent blood clot in his lung.
Shortly after Charles Vallow's death, Lori Daybell — who then had the last name Vallow — and her children moved to the rural eastern Idaho community of Rexburg, near where Chad Daybell lived. At the time, Chad Daybell was married to Tammy Daybell. She died in October of 2019, and her obituary said the death was from natural causes.
Authorities grew suspicious, however, when Chad and Lori Daybell got married just two weeks later, and investigators had Tammy Daybell's body exhumed for an autopsy. Authorities have not released her cause of death, but his children told CBS News' "48 Hours" that their mother had been asphyxiated.
Police began searching for Lori Daybell's youngest two children in November after relatives raised concerns. The Daybells quickly left town, and were found months later in Hawaii without the children.
Investigators later found the bodies of JJ and Tylee buried in Chad Daybell's yard back in Idaho. They have not disclosed causes of death but court documents said Tylee's body was partially burned.
Friends of the Daybells told investigators that the couple believed people could become "zombies" if they were possessed by evil spirits, a state in which their soul was trapped in limbo, according to police reports. The couple reportedly believed that the only way to rid a person of a zombie was for their body to die, according to police reports.
A friend of the couple, Melanie Gibb, told investigators that Lori Daybell referred to her youngest children as "zombies," and police in Arizona said the couple exchanged text messages saying that Tammy Daybell had been possessed by a dark spirit.
source: https://www.cbsnews.com/news/lori-vallow-daybell-accused-in-killing-jj-vallow-tylee-vallow-fit-for-trial/