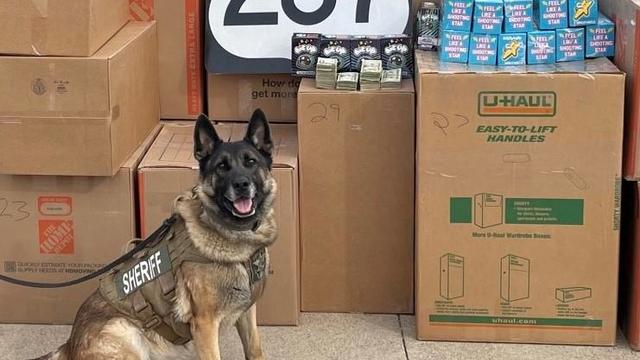 A Texas K-9 discovered an estimated $1.7 million worth of marijuana and mushroom-laced candy bars during a traffic stop in North Texas last week, authorities said.
In a Facebook post Saturday, Wise County Sheriff Lane Akin said a deputy stopped a white Toyota Tacoma pickup truck pulling a U-Haul van trailer after it was spotted swerving erratically. Wise County is located in the Dallas-Fort Worth metro area.
The driver, who Akin described as "exceedingly nervous," told the officer that he and his grandmother, who was sitting in the passenger seat, were headed to a funeral in Southeast Texas.
The grandmother, however, told the officer a different story, explaining that the two were driving to Tennessee and had a trailer full of furniture with them, Akin said.
When K-9 Benni arrived on scene, he quickly detected "wafting scents" and alerted deputies, the sheriff detailed. When they opened the trailer, they discovered no furniture, but instead 31 sealed moving boxes which included 840 pounds of marijuana, 242 pounds of "candy bars infused with psilocybin mushrooms," and 1,100 THC vape cartridges.
The entire haul had an estimated value of $1.7 million, Akin said.
The driver and his grandmother were both arrested on multiple charges of possession of controlled substances. Their bond was set at $70,000 each, according to Akin. Their names were not released.
The Wise County Messenger newspaper reported that the two suspects later told officers they were originally from Temecula, California, and had traveled from Las Vegas.
K-9 units are difficult to fool, as they have 200 million olfactory receptors, as opposed to the five million that humans have, Akin noted.
source: https://www.cbsnews.com/news/texas-k9-one-point-seven-million-dollars-worth-marijuana-mushroom-laced-candy-bars-traffic-stop/