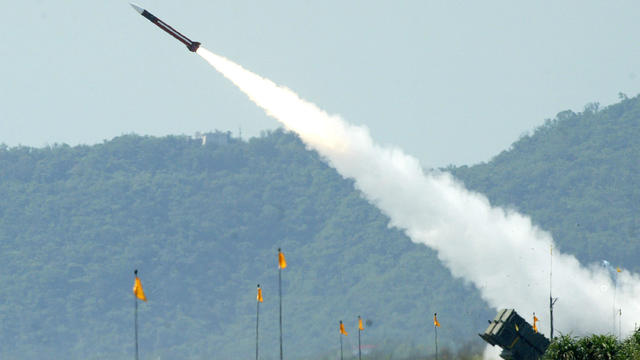 The US. says it's approved the sale of up to $95 million worth of training and equipment to support Taiwan's Patriot missile defense system, something Taipei has said would help protect the island from any invasion by China.
"The proposed sale will help to sustain (Taiwan's) missile density and ensure readiness for air operations," the Pentagon's Defense Security Cooperation Agency said in a statement.
It added that Taiwan will use the proposed training and equipment as a "deterrent to regional threats and to strengthen homeland defense."
Taiwan's foreign ministry welcomed the arms deal  -- the third approved under President Joe Biden -- saying it would help protect against Beijing's "continuing military expansion and provocation."
"In the face of China's continuing military expansion and provocation, Taiwan must fully demonstrate its strong determination to defend itself," it said in a statement.
"Our government will continue to strengthen our self-defense and asymmetric combat capabilities."
Taiwan's defense ministry said the planned deal is expected to take effect in one month.
The latest arms purchase comes as Taiwan closely watches the ongoing Russia-Ukraine war, as it also lives under the constant threat of an invasion by a giant neighbor.
China regards Taiwan as its territory and has vowed repeatedly to seize it one day, by force if necessary.
Beijing has dramatically ramped up its saber-rattling in recent years, sending 969 Chinese warplanes into Taiwan's air defense zone in 2021, according to a database compiled by AFP -- more than double the roughly 380 in 2020.
Taiwan has recorded about 280 warplanes entering the zone so far this year.
Western powers, including regional neighbors Japan and South Korea, have looked on with growing alarm at Beijing's designs on Taiwan under President Xi Jinping, China's most authoritarian leader in a generation.
On Tuesday, Australia announced it was accelerating plans to buy long-range missiles, citing new threats posed by both Russia and China, including a potential invasion of Taiwan.
"There was a working assumption that an act of aggression by China toward Taiwan might take place in the 2040s. I think that timeline now has been dramatically compressed," Australian defense minister Peter Dutton told Seven Network television.
Washington has remained Taipei's most important ally and leading arms supplier despite switching diplomatic recognition to Beijing in 1979.
The Patriot is a highly mobile surface-to-air missile system that would be a crucial defense against Chinese warplanes.
Former President Donald Trump ramped up big-ticket arms sales to Taiwan during his time in office as he feuded with Beijing on a host of issues, from trade to national security.
Sales included drones, missile systems and new-generation fighter jets.
source: https://www.cbsnews.com/news/us-up-to-95-million-equipment-training-taiwans-patriot-missile-system/