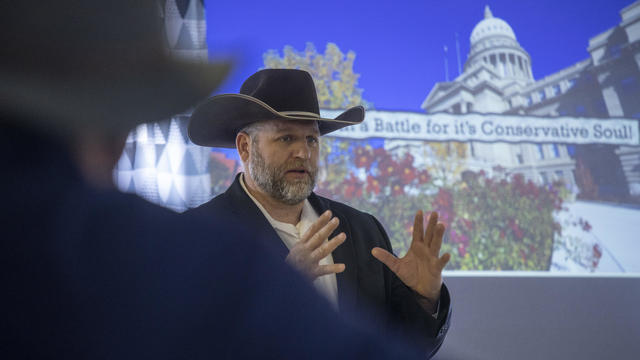 Boise, Idaho — Idaho gubernatorial candidate and antigovernment activist Ammon Bundy received a $3,000 fine and 10 days in jail Thursday for contempt of court.
Bundy was immediately handcuffed in Fourth District Court in Boise and taken to the Ada County Jail.
Judge Annie McDevitt ruled Bundy failed to perform 40 hours of community service following a 2020 trespassing conviction at the Idaho Statehouse.
Bundy argued his work for his own campaign as governor counted toward the 40 hours of community service.
McDevitt disagreed, telling Bundy that he "took the time and effort to blatantly disrespect the court's order, making a mockery of the sentence you received."
Bundy was arrested Aug. 25, 2020, after refusing to leave a Statehouse auditorium after officials ordered the room to be cleared. He was there with others protesting coronavirus pandemic legislation during a special session of the Idaho Legislature called because of the pandemic.
Bundy, who is running as an Independent candidate to be Idaho's next governor in a crowded race, is well-known for participating in armed standoffs with law enforcement, notably at the Malheur National Wildlife Refuge in Oregon in 2016, which left one man dead, and on federal land near his family's ranch in Nevada in 2014.
CBS Boise affiliate KBOI-TV says Bundy led protests at a medical center there last month after a baby was taken from his parents due to a ruling from state health officials and police that the baby was in immediate danger.
One of the protests caused the Boise hospital to go into an hour-long lockdown, resulting in the transfer of some patients to other facilities.
source: https://www.cbsnews.com/news/ammon-bundy-jail-term-mockery-prior-sentence/