Man City back on top of EPL

Manchester City leapfrogged Liverpool back to the Premier League summit thanks to three second-half goals against Brighton. 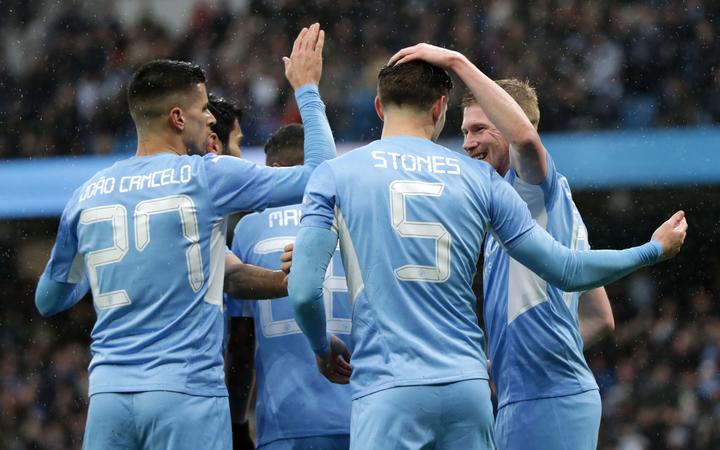 After struggling to break down Graham Potter's men in a frustrating opening period, Kevin de Bruyne provided the inspiration as City restored their one-point advantage with a 3-0 win.

De Bruyne created the opener for Riyad Mahrez and provided the faint final pass for Bernardo Silva to wrap up the scoring eight minutes from time.

In between, Phil Foden needed the aid of a deflection to beat the Brighton goalkeeper after Mahrez spotted the England man on his own just outside the box at a corner.

The goals relieved building tension around Etihad Stadium and leave City knowing six more wins are now required for Pep Guardiola's men to retain their title, starting with the home game against relegation-threatened Watford this weekend.

The win left Arsenal just outside the top four qualifying positions in fifth place but level with Spurs on 57 points and only behind them on goal difference.

Spurs host Arsenal on May 12.

Chelsea stayed in third place on 62 points having played a game less than both Spurs and Arsenal and still looking on course for their own Champions League spot next season.

The defeat represented the first time since 1993 that Chelsea lost three consecutive home games having been beaten by Brentford in the league and Real Madrid in the Champions League.

The game was played with some sections of Stamford Bridge unfilled after the government ruled in March that Chelsea could not make new ticket sales to their fans under restrictions linked to the club's Russian owner Roman Abramovich.

Everton striker Richarlison scored in second-half stoppage time to snatch a vital point in a 1-1 draw with Leicester City at Goodison Park.

The result leaves Everton, who meet Liverpool in the Merseyside derby this weekend, four points above the relegation zone on 29 points, while Leicester are in ninth on 41 points.

Newcastle all but secured their Premier League survival with a 1-0 win over Crystal Palace at St James' Park.

Newcastle improve to 11th on the table on 40 points, 15 points above the relegation zone.