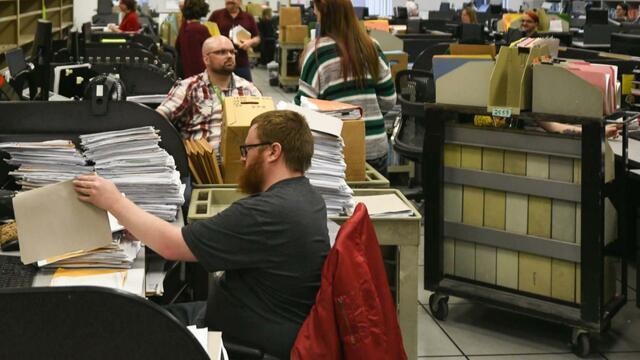 The IRS is dealing with backlog of unprocessed returns and unanswered calls as it heads into the end of this year's tax filing season.
In a report to Congress last week, the IRS acknowledged only about 20% of callers have been getting through to live IRS agents at times this month.  In 2021, just 11% of calls were answered.
The IRS estimates that more than 3 million tax returns are still being processed from 2021. Budget cuts and COVID disruptions have shrunk staffing to less than 80,000 people—the same level it was nearly a half-century ago.
While roughly 10% of taxpayers still file on paper, which the national taxpayer advocate calls the agency's "kryptonite," often the people processing the paper are the same ones who answer the phones.
"On average our hold times can range anywhere between 30 and 40 minutes," IRS Chief Taxpayer Experience Officer Corbin McFarlane told CBS News'  Scott MacFarlane.
Corbin said the agency is hiring new employees and contractors to lighten the load but Americans won't see most of the impact until future tax seasons
"I'd say we need thousands more employees still coming to join us. We are an aging workforce, and we know we need to prepare for the future," Corbin said.
Even as this tax season ends, the agency said it is trying to hire thousands more people, holding job fairs nationwide.
The IRS recommends those who are filing their taxes this weekend file electronically and set up direct deposit for their payment option.
source: https://www.cbsnews.com/news/irs-backlog-tax-returns-staffing-shortages/